In The Spanish Chair

At the end of our shoot, I shot my remaining roll of film – Kodak Portra 400 – on the Hasselblad 500CM with 150mm lens. The lens choice was accidental, as it was the only one I had with me – the 80mm would have been better. Film was pushed one stop in processing as I believed I had underexposed it after moving the sitter but not the lights. 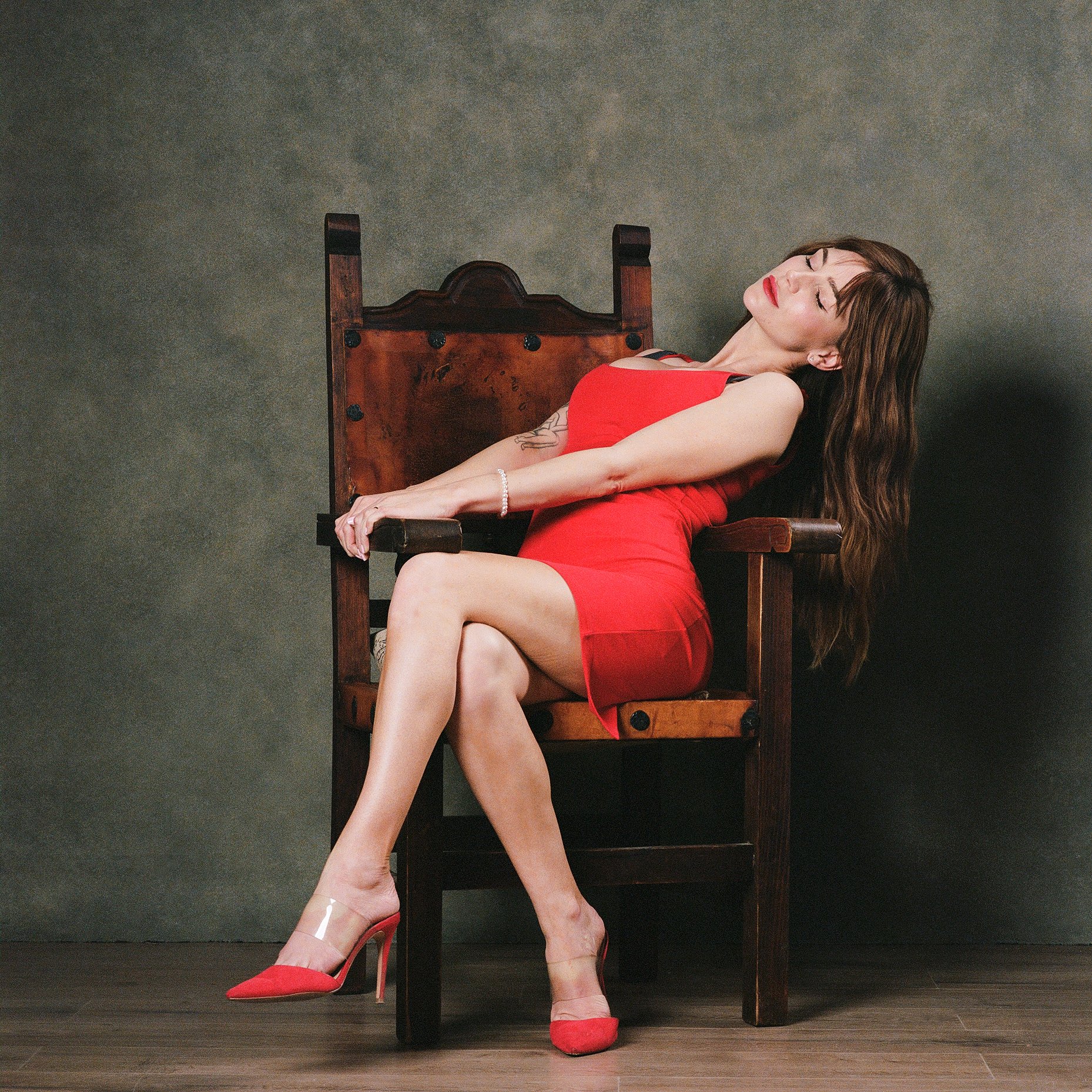 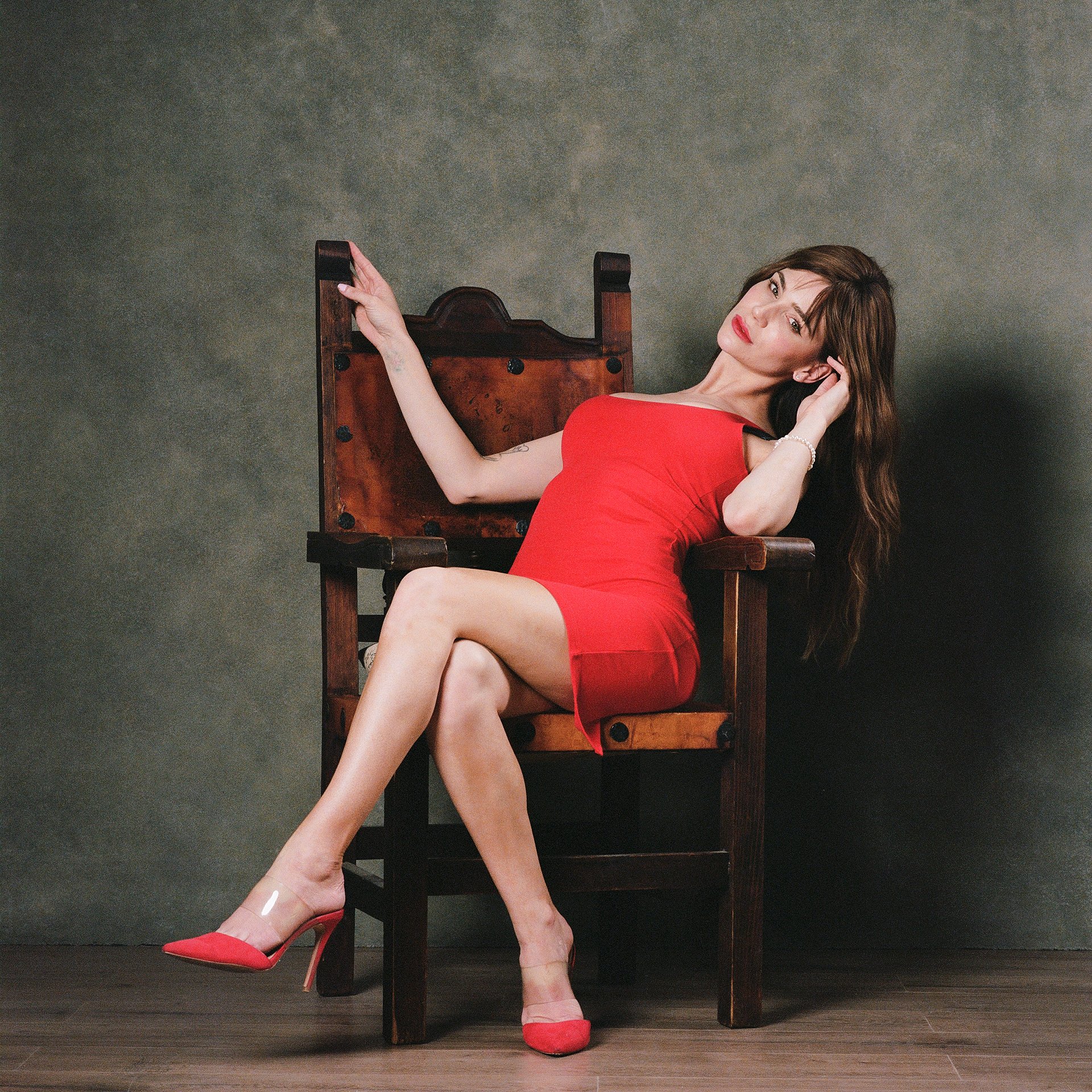 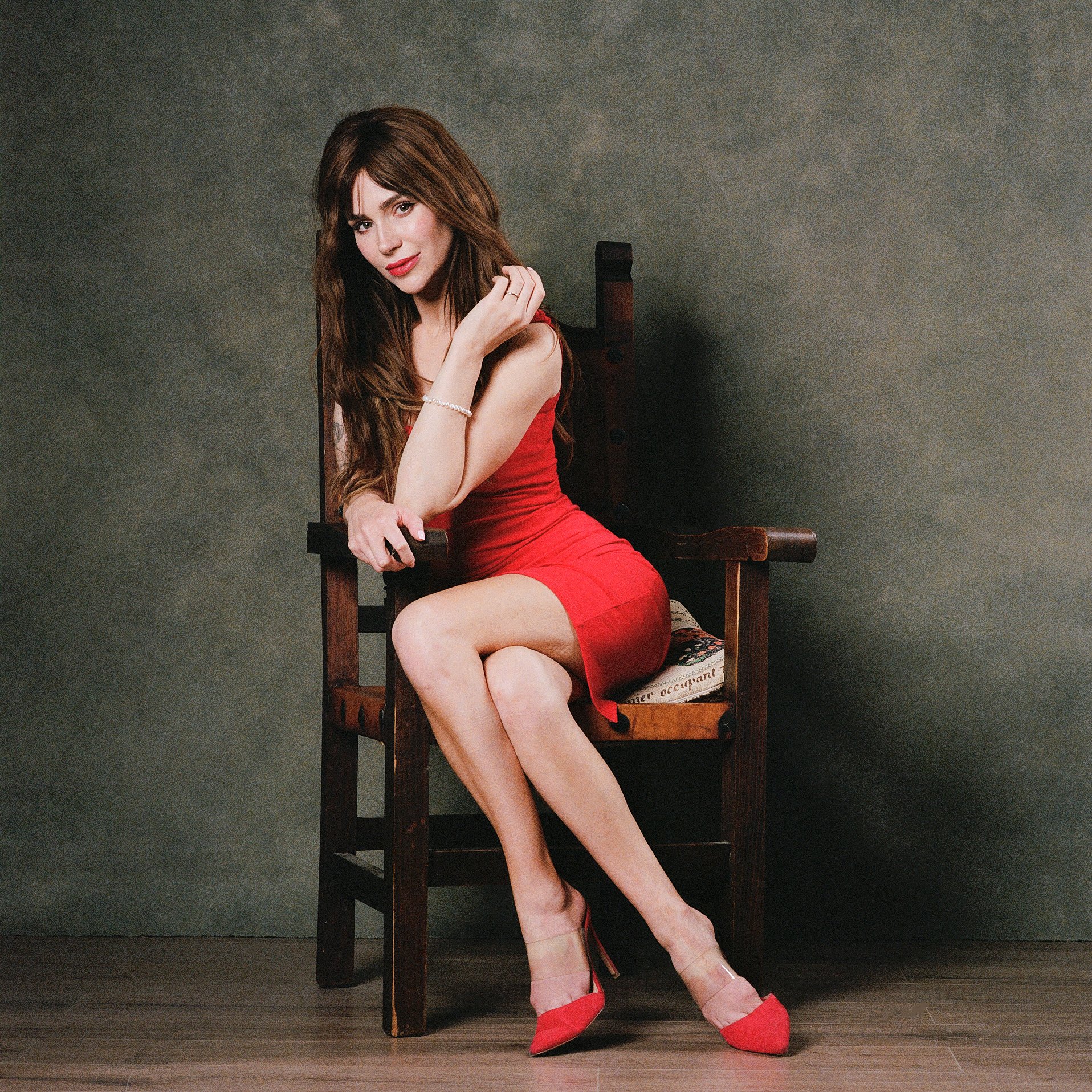 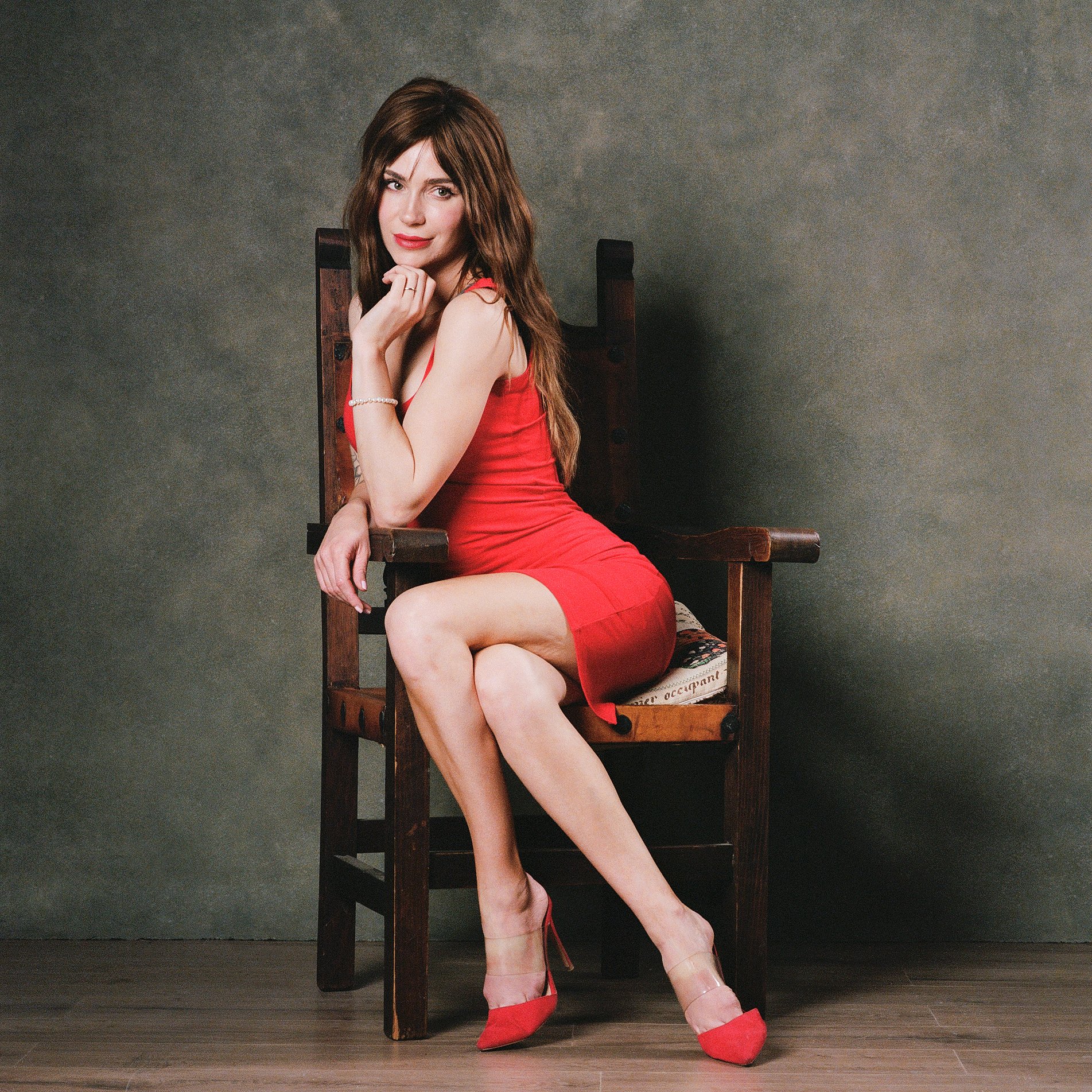 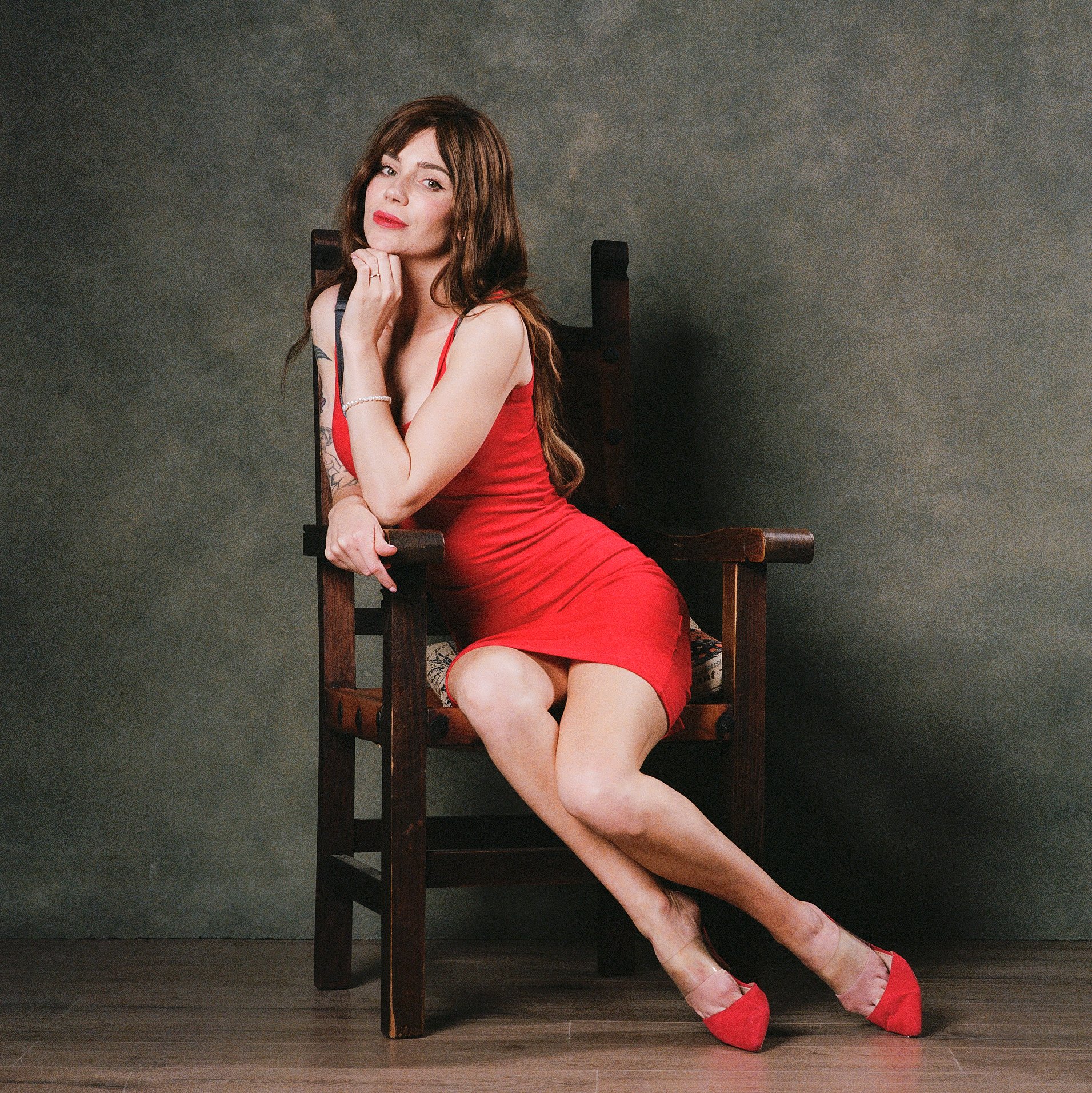 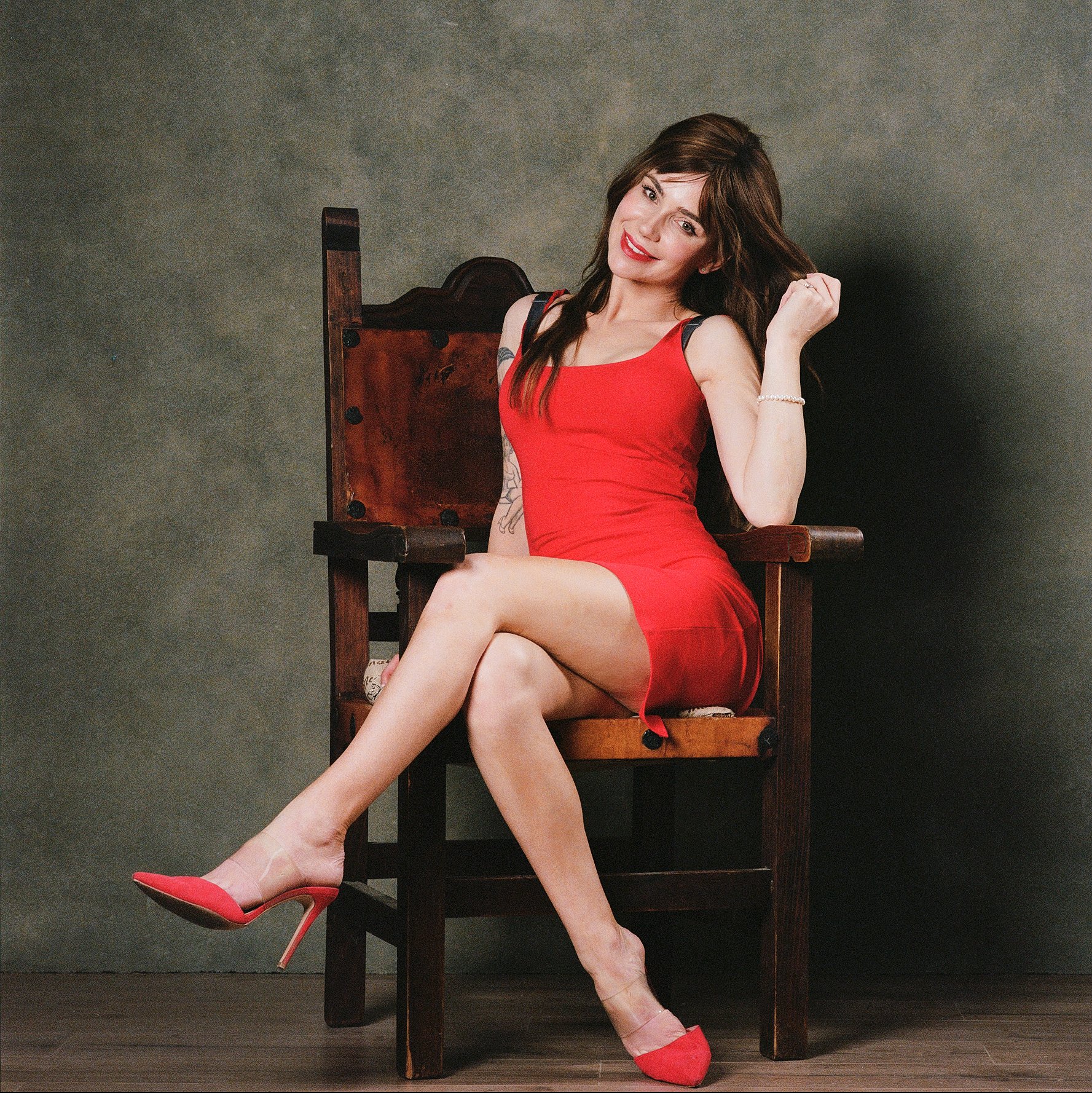 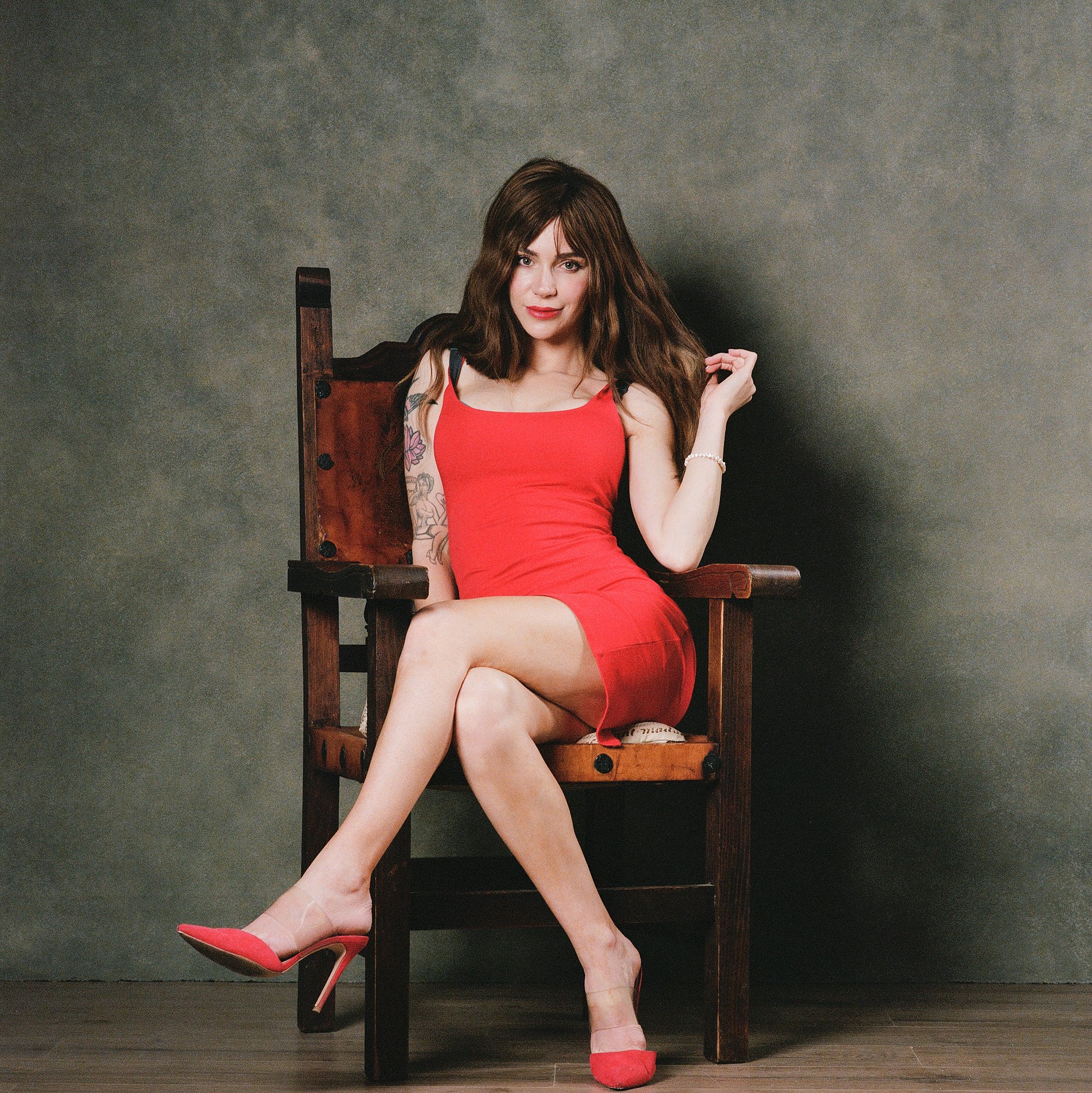 I got together with Sophia Anna to create some Jessica Jones inspired images. 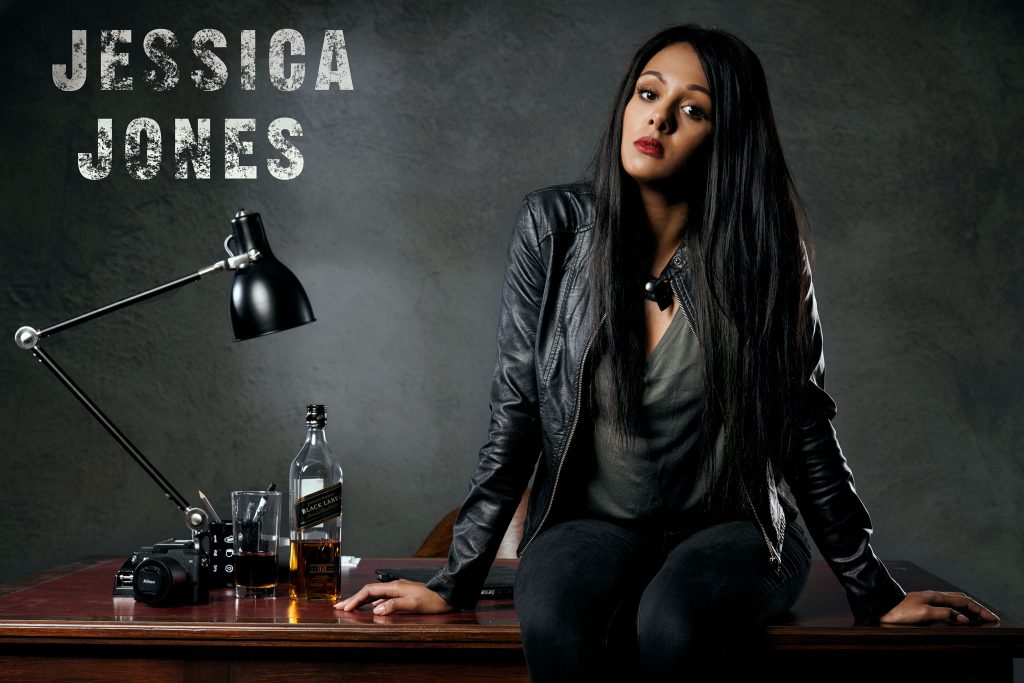 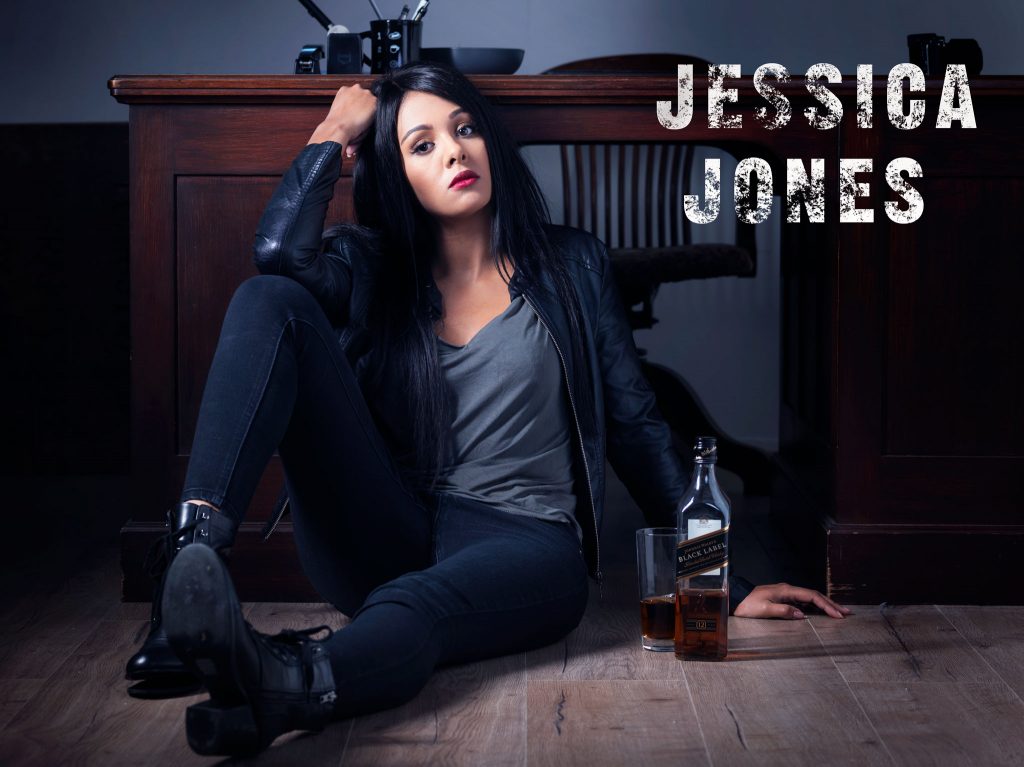 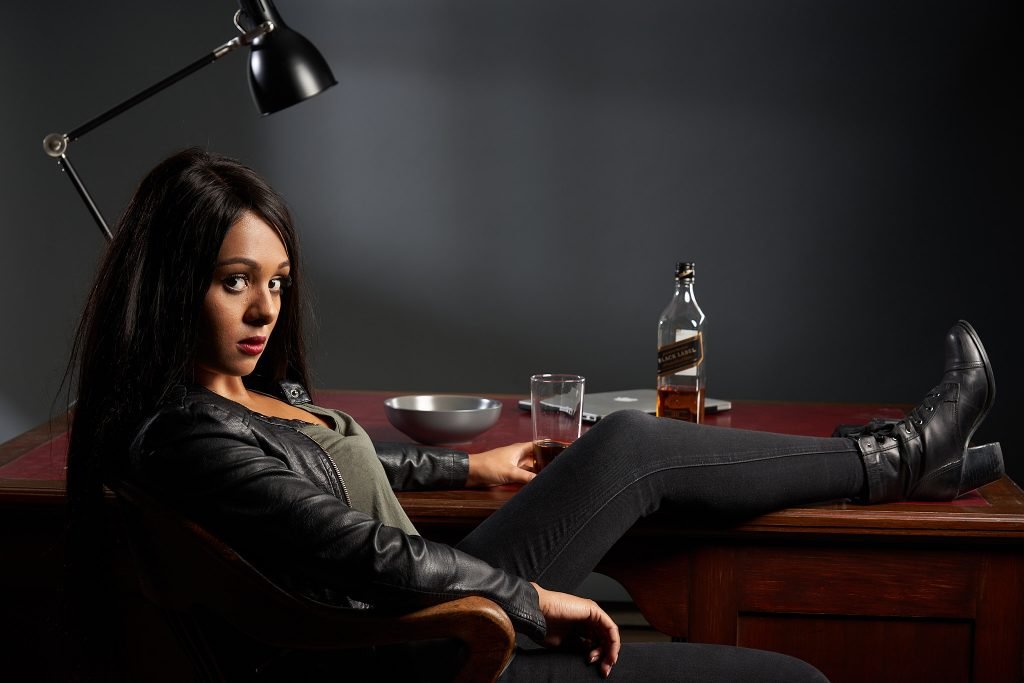 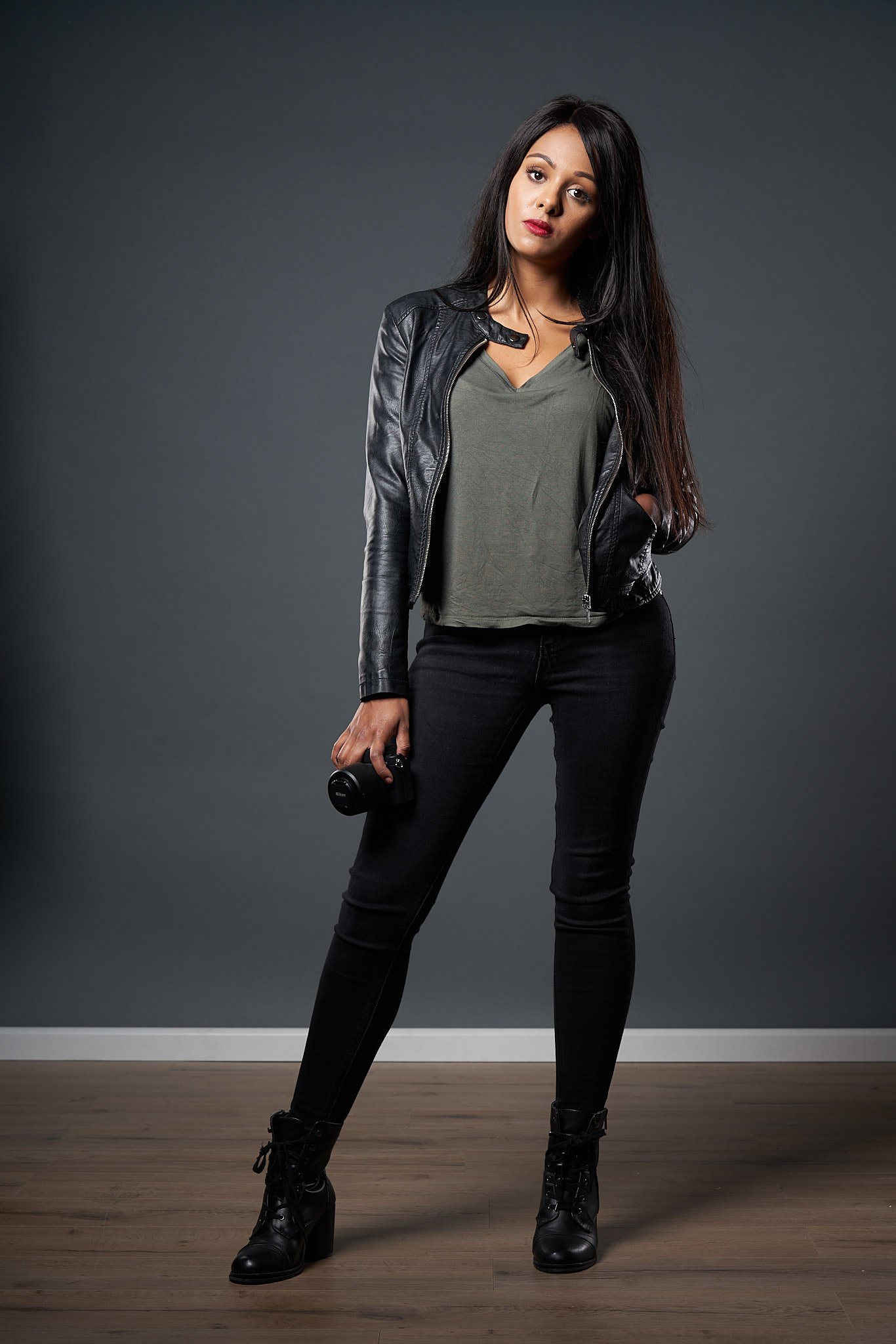 I have an ancient Hasselblad. H4D40, dating from about 2010. It has been mine (slightly damaged, second hand) from 2015. It has a Firewire connection for tethering. In it’s day Firewire aka IEEE1394 was state of the art, a technology from Apple, universally used in the music and graphics industry for fast connections to peripheral equipment.
Firewire has, however, been superceded by Thunderbolt and USB C.  Apple stopped putting Firewire ports on their computers years ago. Fortunately they did sell a Firewire to Thunderbolt (2) adapter, so for some years I used a 13 inch Macbook Pro with this adapter. But that Macbook had only 8gb of RAM, which Apple made non upgradeable, and when I recently upgraded I decided to go with a Lenovo X1 Extreme. Of course it does not have Thunderbolt 2 ports, but does have  USB C ports, which are for the most part compatible with Apple’s Thunderbolt 3.  I had researched this before my purchase, and bought a Thuderbolt 2 to Thunderbot 3 adapter: so plugging my Firewre cable into the Firewire to Thunderbolt 2 adapter, and this into the Thunderbolt 2 to Thunderbolt 3 adapter, and this into the USB C port on my Thinkpad, I was good to go.
Except for some mysterious intermittent problems. Most went away with driver and firmware upgrades, but one remained.  Shooting tethered would work perfectly – for a while, then the connection to the laptop would drop without warning. Checking the screen would reveal that the last few shots had not been captured to the laptop. Fortunately they went to the card on the camera, so all was not lost. Initially I assumed that this was due to cable issues from shooting handheld, but most recently it happened with the camera on  a heavy tripod, and the cable secured at both ends to prevent strain.
So I delved into Windows System Log, a place I have avoided since I left the server support industry, and there I found the following entry:
The driver has detected a device with old or out-of-date firmware.  The device will not be used.
So effectively, after using the connected camera for half an hour or so, Windows reviewed the situation, determined that the firmware (on the camera?) was ‘out of date’ (though at the most recent version) and shut down the port. Without posting any informative message.
At this point I was considering either not using the Hasselblad, or going back to the old Macbook Pro.  But apparently this problem with Firewire has been known since Windows 7, and there is a solution: to change the Firewire driver to the legacy version, which was included in Windows 7 but was removed from Windows 8 onward. A quick search on Google found the driver, and equally quickly it was downloaded and installed.
Worked like magic – for a while.  Soon I was receiving those ‘Capture failed’ messages again, and communication with the laptop was lost.  It turned out that automatic upgrades had replaced the legacy driver with the later one, and changing the driver back was an easy fix. The missing images were saved to the camera card, so nothing was lost. It looked like the problem was solved.
But it was not so simple. Later I received the same messages again, but the driver had not changed, it was still the legacy driver. So some other issue had cropped up,  So far i don’t know what it is. There is nothing in the system log to indicate an error.  And the usb port had apparently shut down, as I could not get my Sony to connect without restarting the computer. I am now seriously considering sellng the Hasselblad, and certainly won’t be using it again for tethered people shoots. Perhaps for product. We shall see.

T. Not a Teddy Bear

I had the opportunity to shoot with Adelaide personality, actor, model,  influencer, and social media manager Dale “T-Bear” Jackson.

Find him at TbearBOA on Facebook, Starnow, LinkedIn, and Insta. 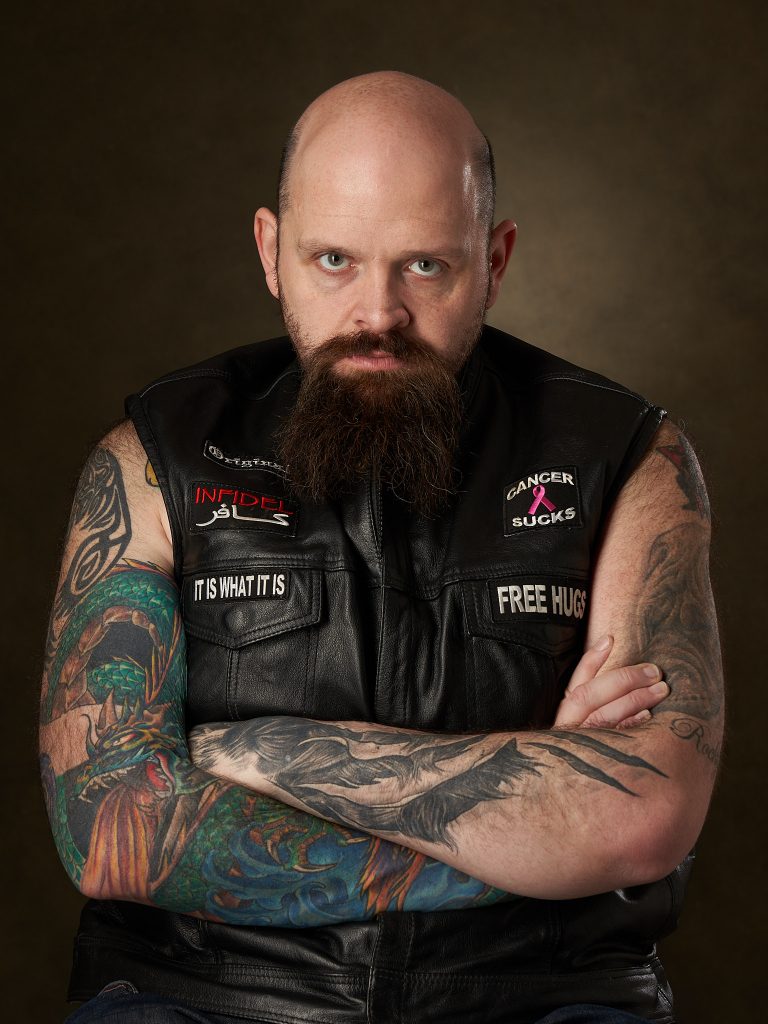 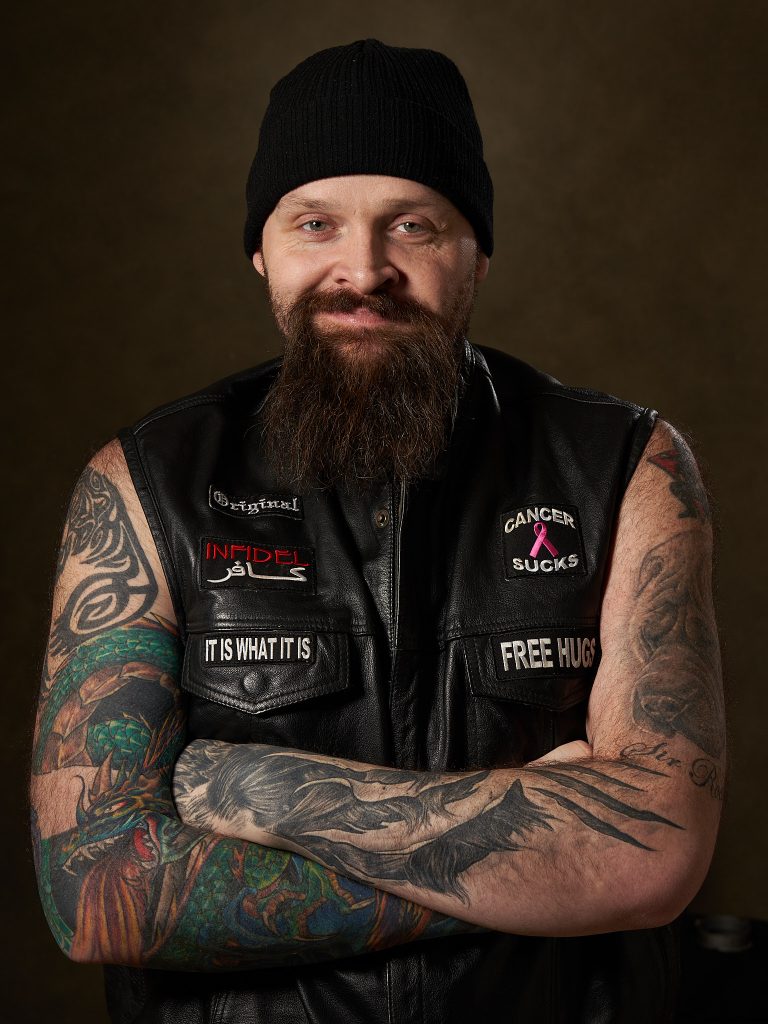 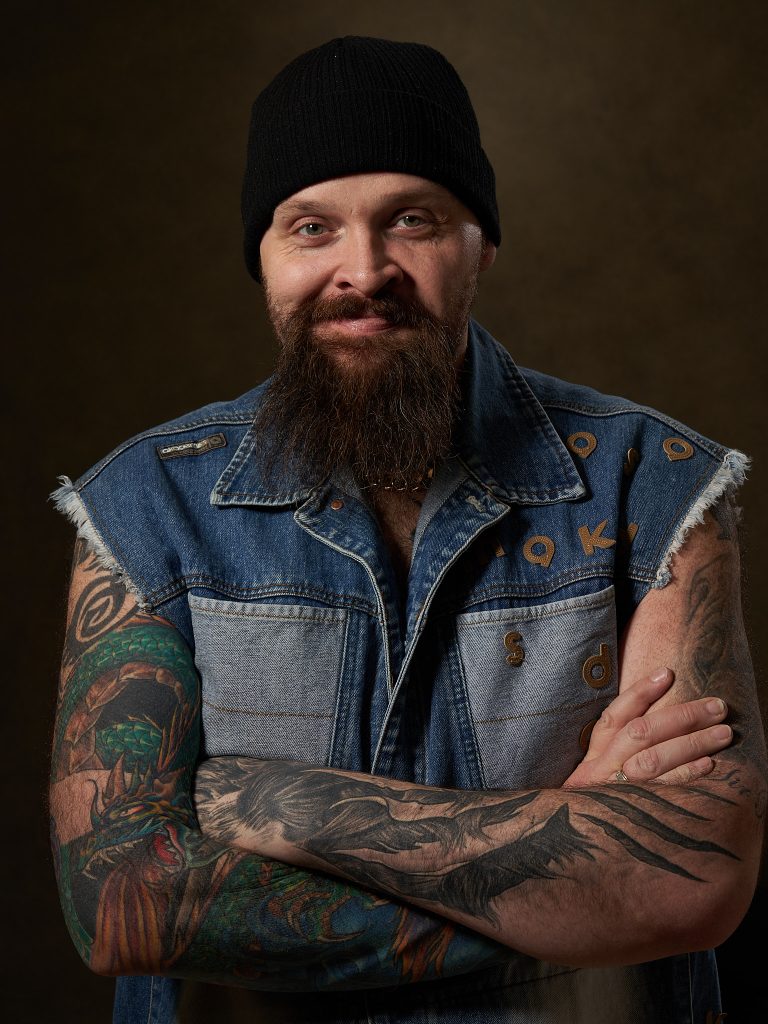 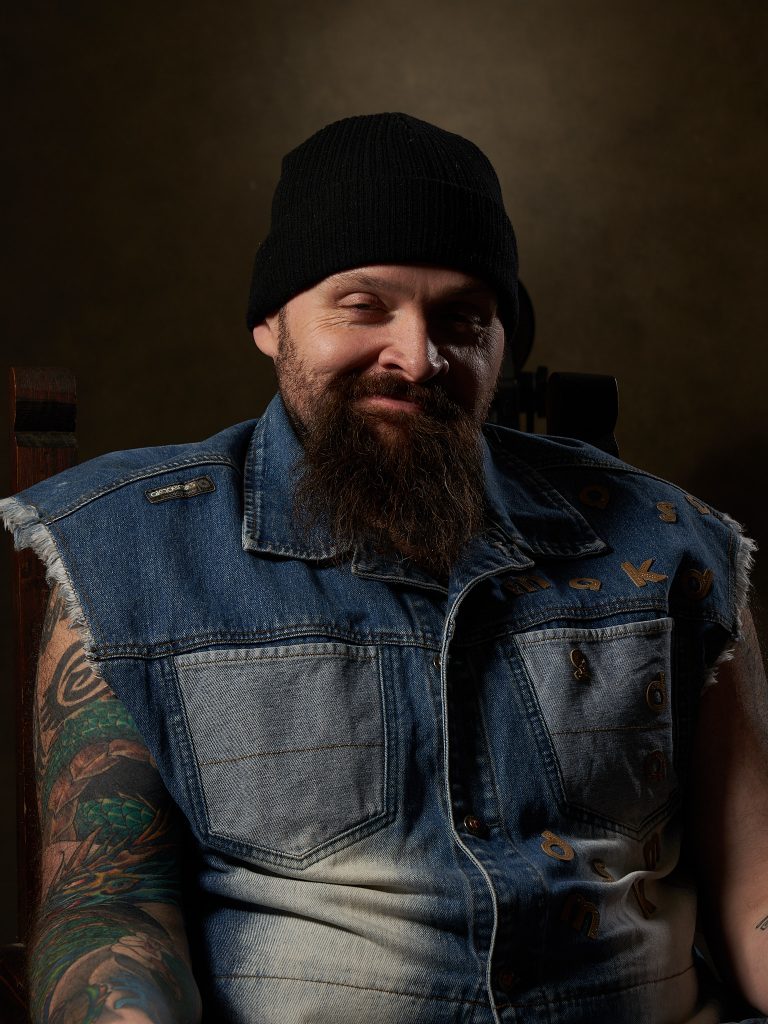 From a recent shoot. Cecelia is a travelling model and dancer.

Em Bear brought a vintage jacket to the studio, for which I am eternally grateful, because it resulted in this image. 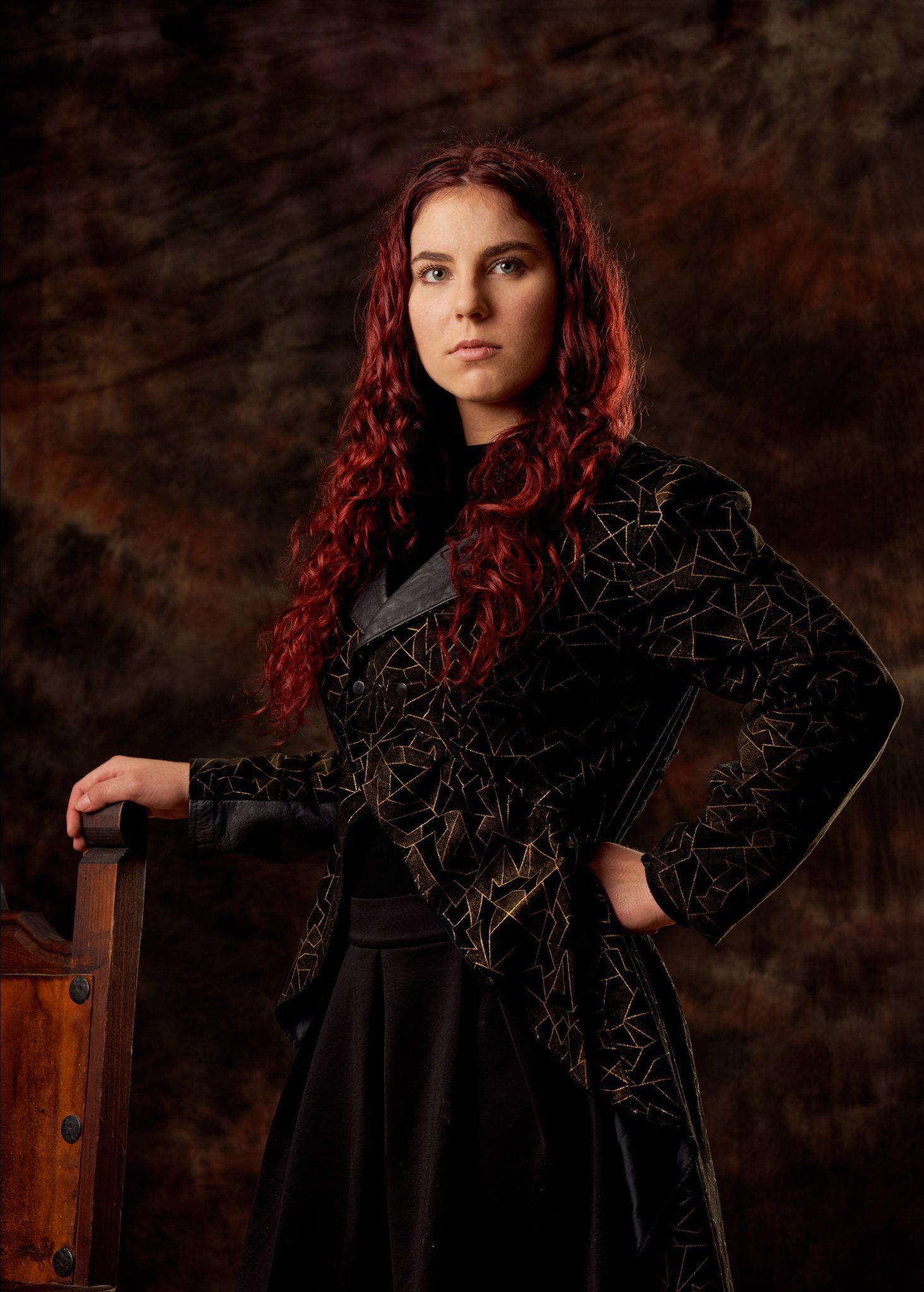 Shooting with the Hasselblad 500CM

I’ve had this 40 year old film camera for a while now, and put quite a few rolls of film through it. I thought I’d take the time to go back and look at some shots from each of the shoots, or indeed, rolls, as I would only shoot one roll at at time due to expense.

First a few words about the camera. It is a medium format camera taking rolls of 120 film, giving 12 shots on a roll. The images are square, so there is no portrait/landscape distinction. The standard lens is 80mm focal length and f2.8 – the shutter is actually in the lens, and offers speeds up to 1/500sec. There are no electronics, no battery, no autofocus, no autoexposure, no auto anything. The camera is a 100% mechanical instrument requiring all settings to be manually configured by the photographer.

Film is readily available for the camera, my usual is Kodak Portra 400, which has ISO or speed of 400, and reasonably fine grain. Colours are designed to favour skin tones. I have the film processed and scanned to digital files by Atkins on Fullarton Road here in Adelaide. 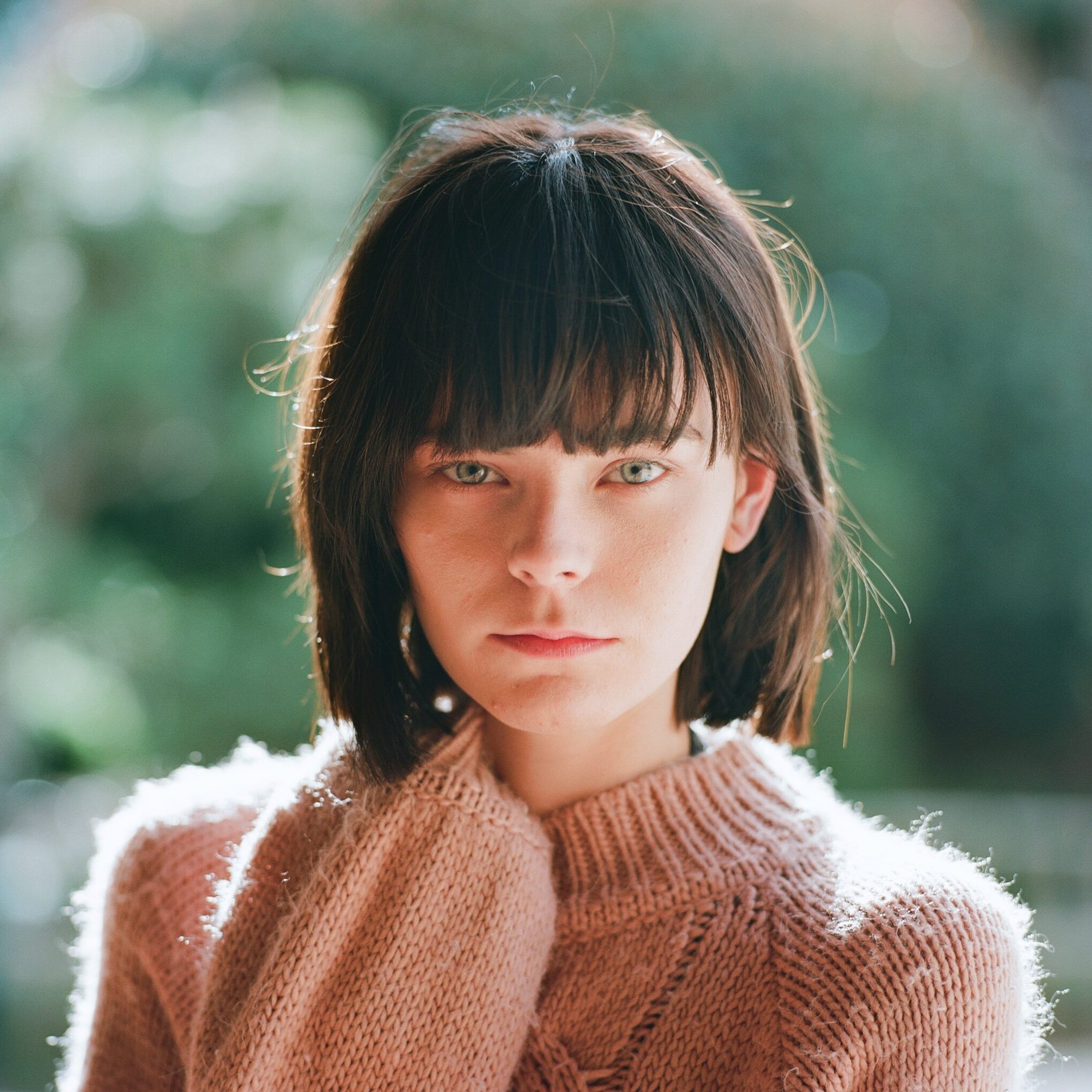 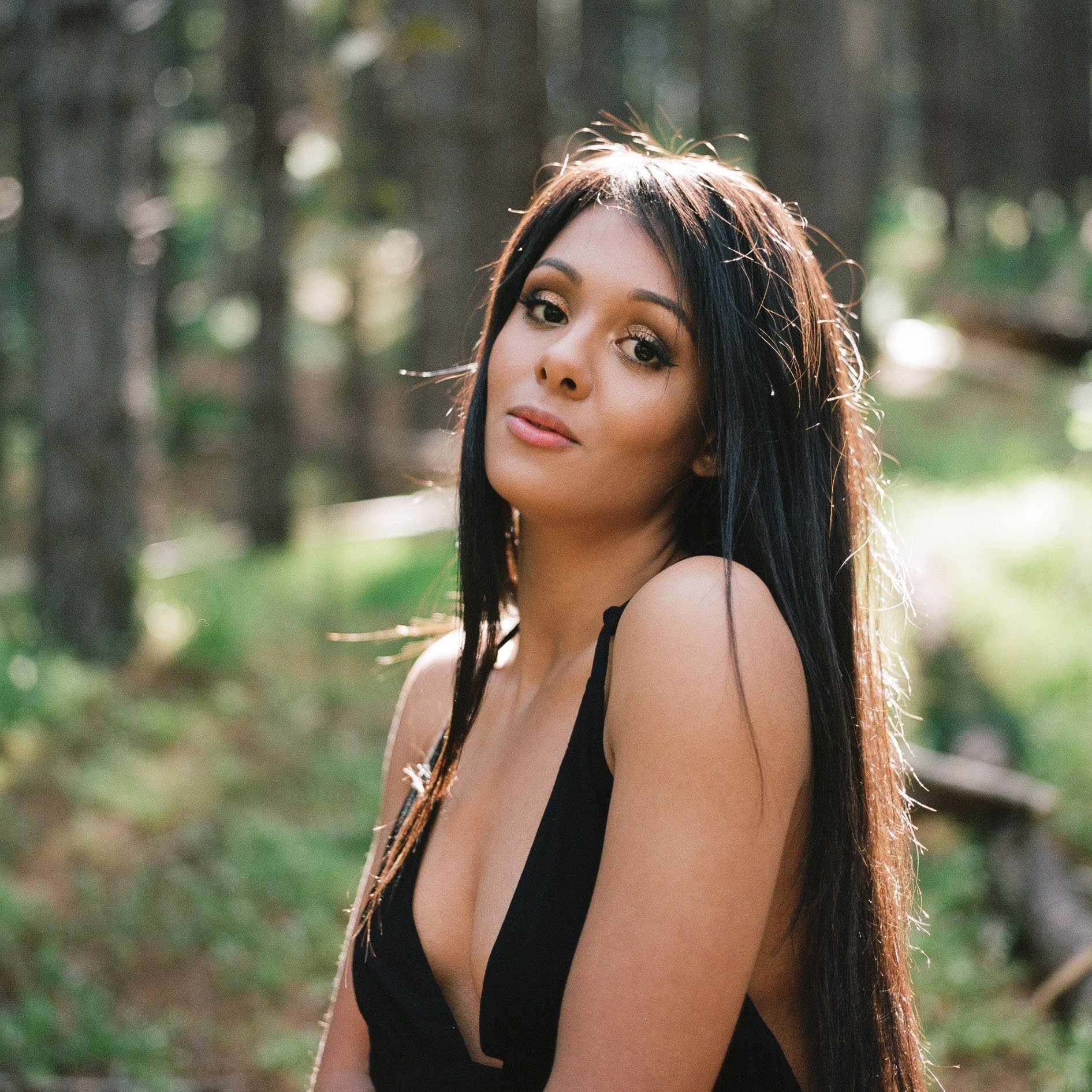 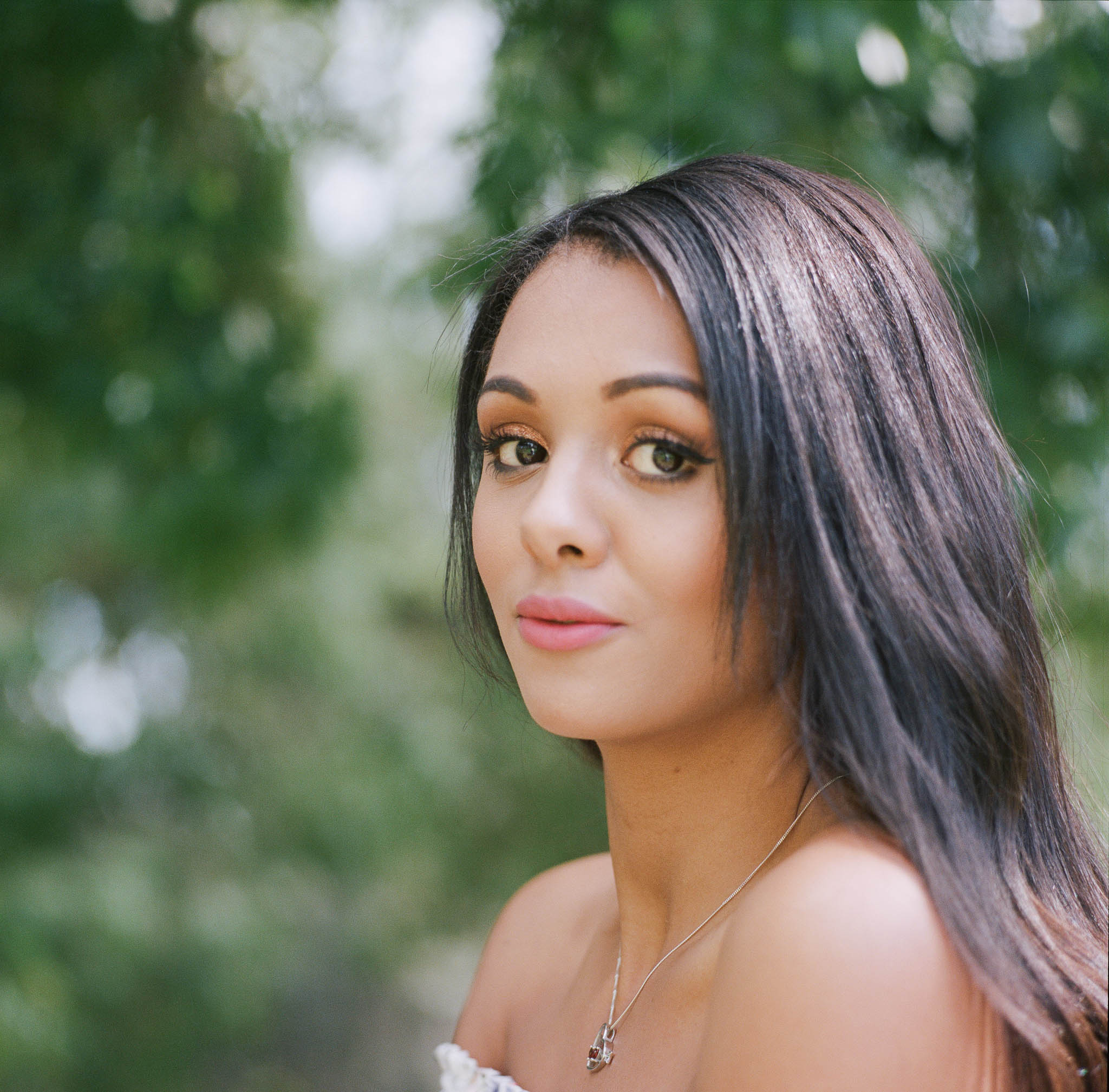 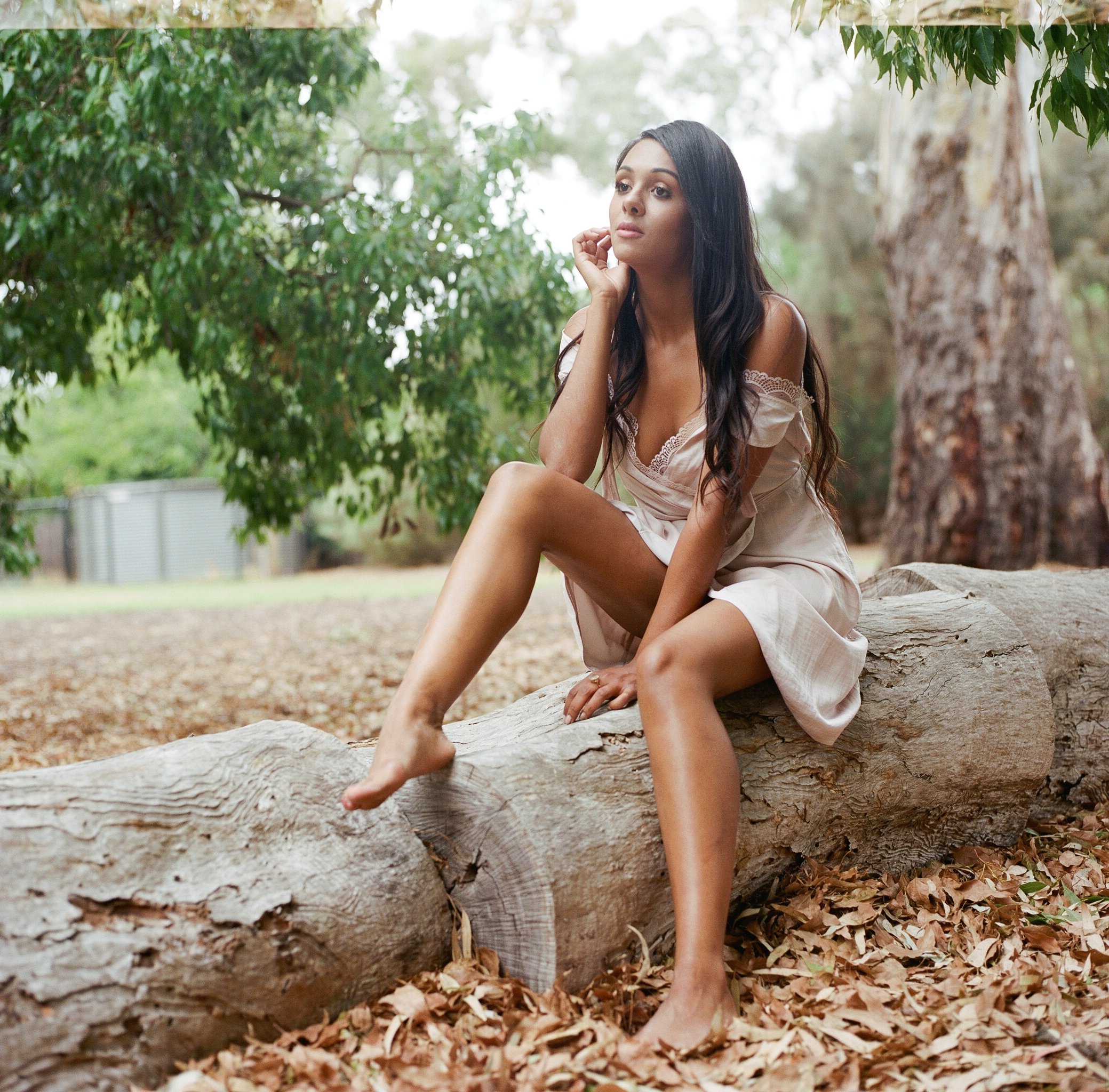 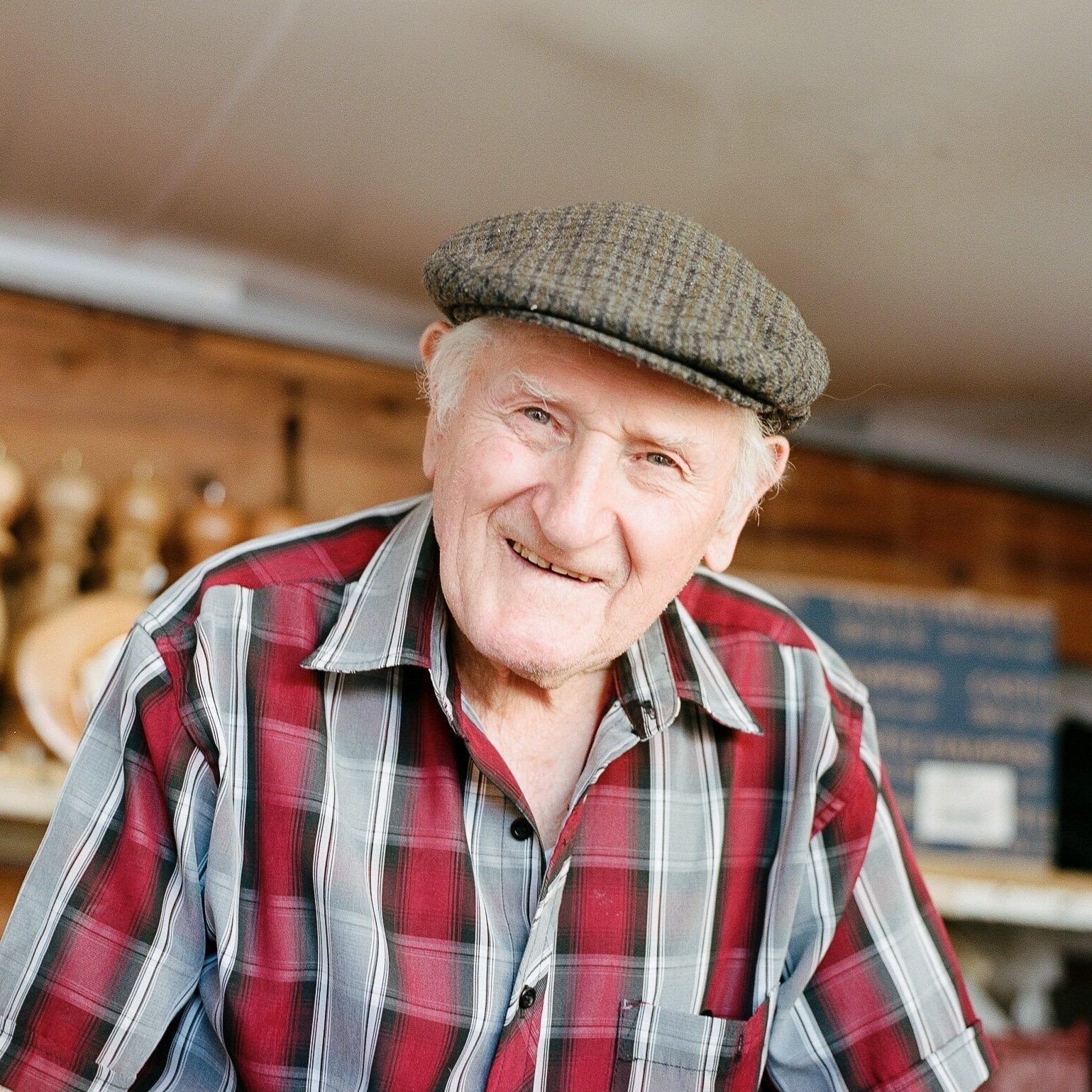 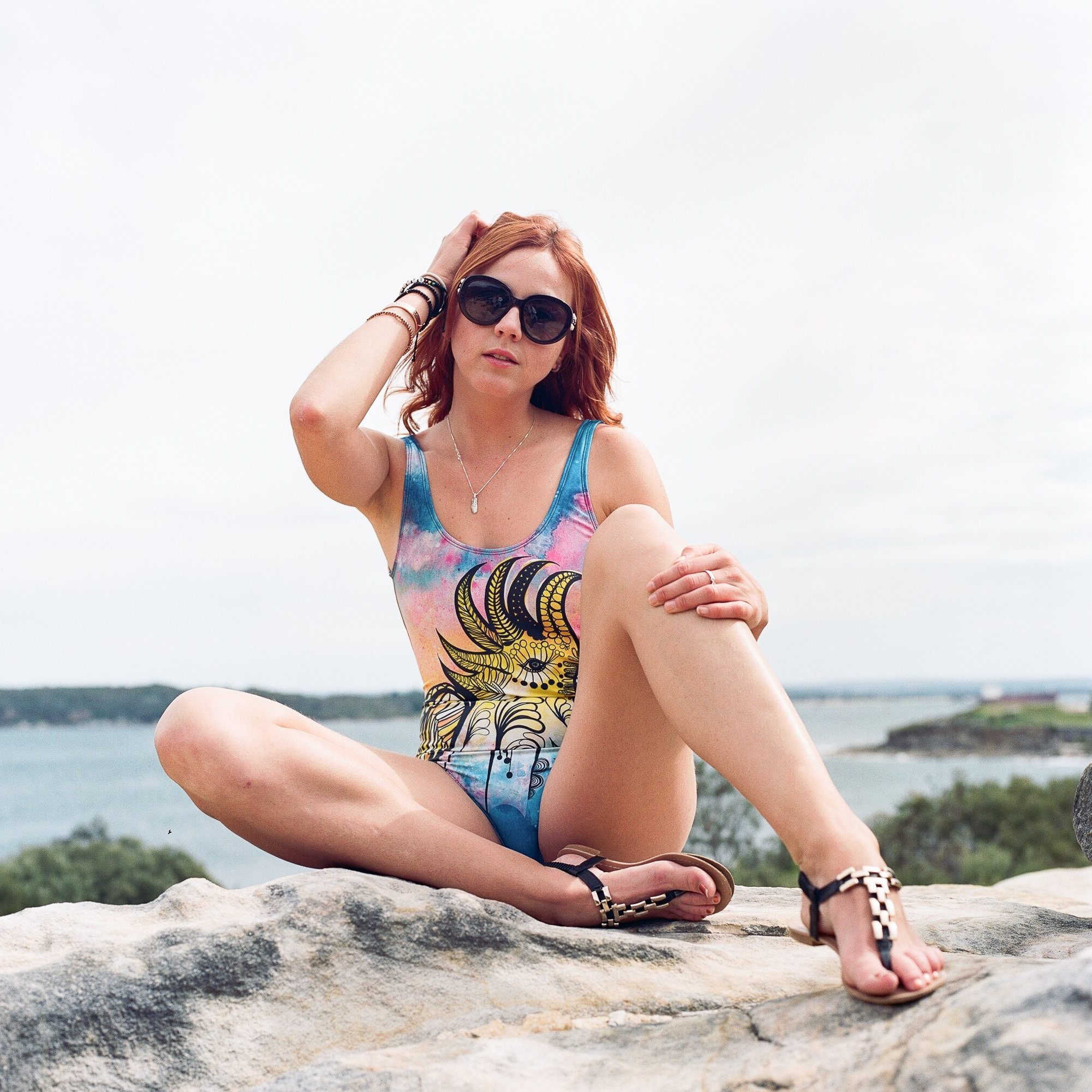 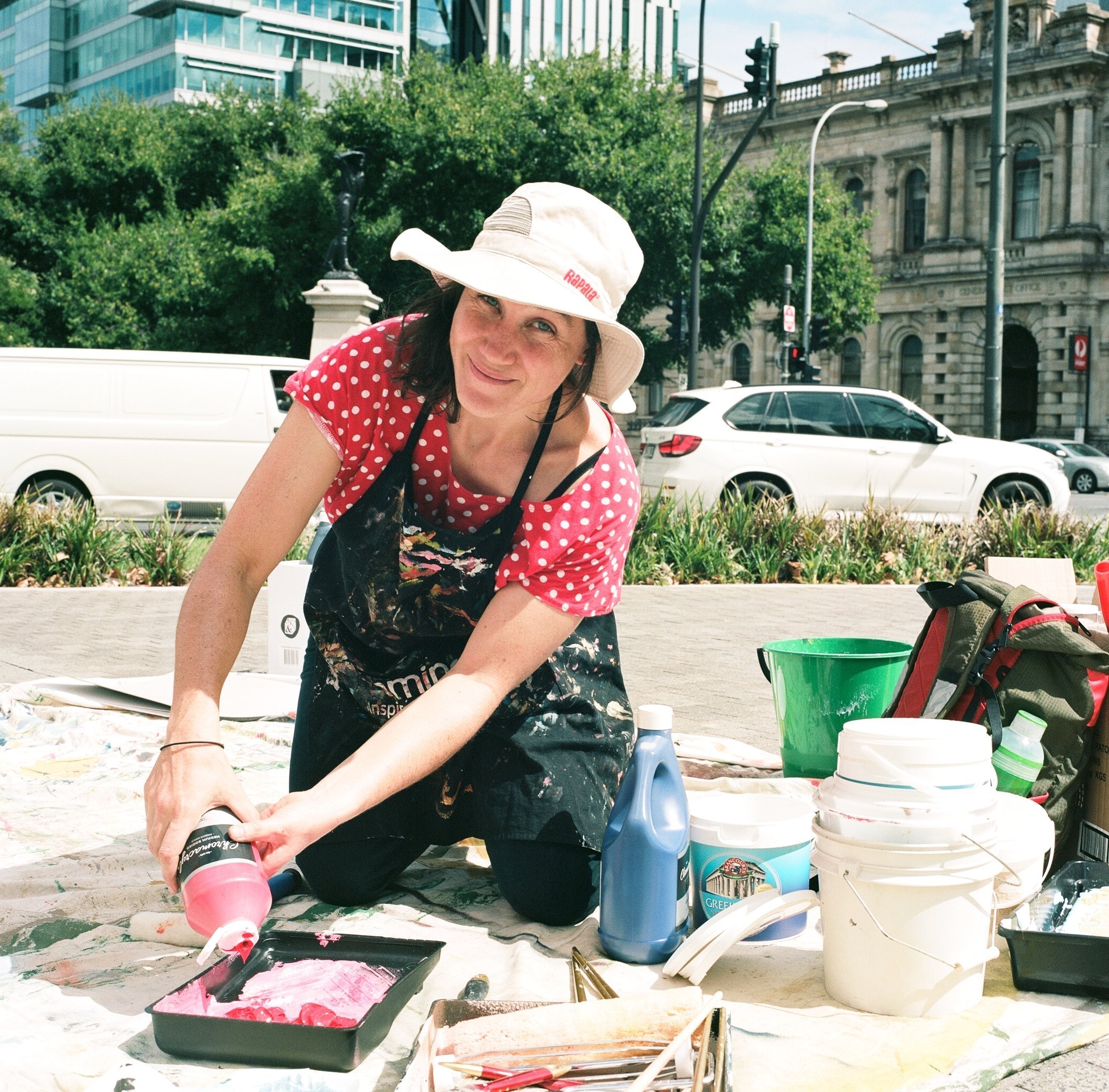 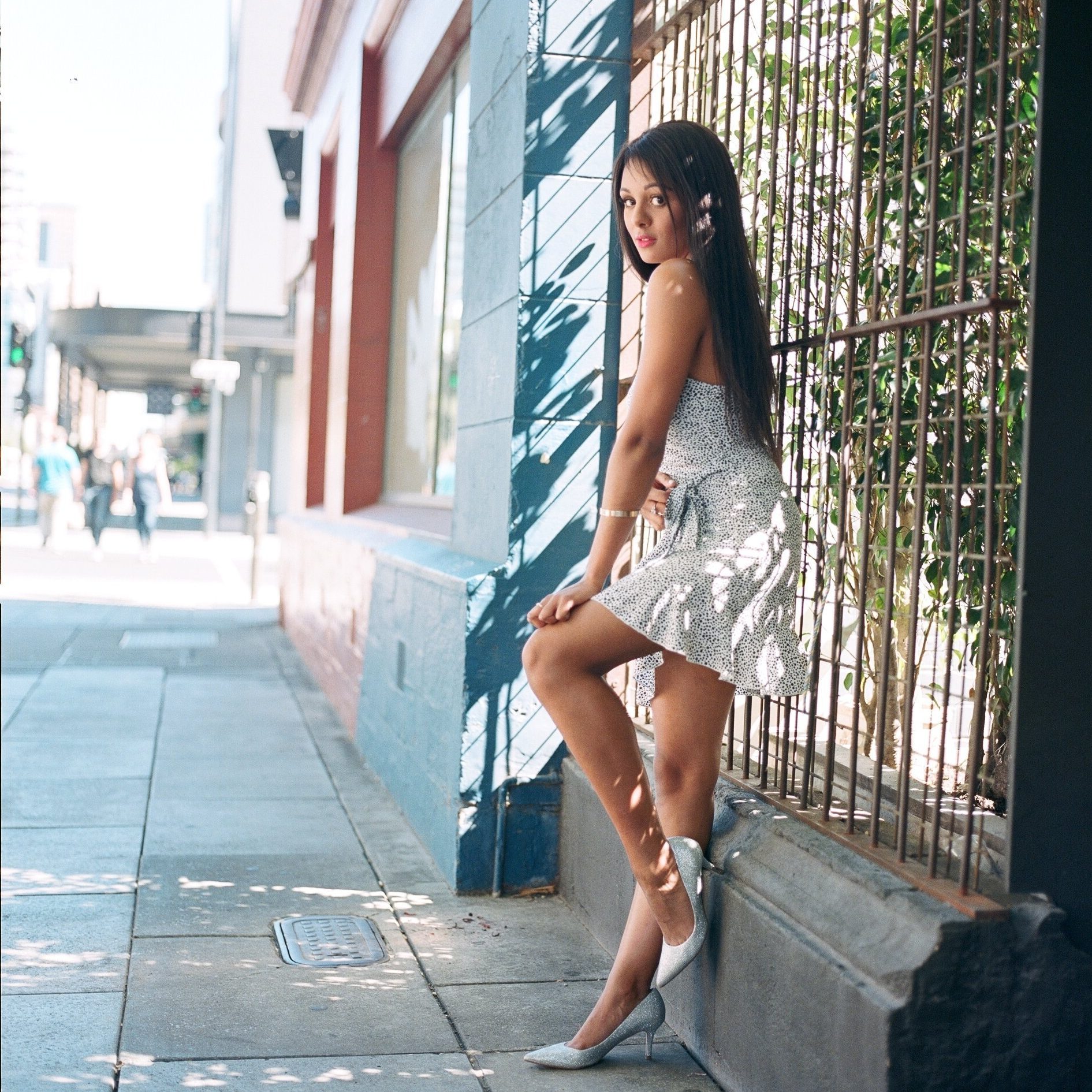 Another outing for the Hasselblad 500CM

I had the opportunity to shoot again with Sophia, again using the 40 year old Hasselblad 500CM loaded with a roll of 12 shots of Kodak Portra 400 film. That’s right, 12 shots only, fully manual, no auto anything. I also took along my Nikon F5 film camera loaded with Kodak Ektar 100, 36 shots this time, and just to be sure, the Sony.  It turns out that the Nikon flares badly when pointed anywhere near the sun, and the autofocus took a little time to get the hang of,  so only 21 shots worked out of 36. I’m not sure that I will use the Nikon again. And the Hasselblad with its manual focus really begs to be on a tripod.

The wall art in frames 6-9 is a painting of drowned Ophelia by renowned artist James Cochran aka Jimmy C. His art can be found across the world, in Australian, European (and the UK)  and South American cities. He is particularly well known for his painting of Bowie in Brixton, London.  Ophelia is a character in Shakespeare’s play Hamlet, and has been painted by many great artists over the years. Best known and also showing Ophelia floating in a stream is by John Millais. Famously Millais used a model in a bath of water – she became severely chilled from hours in the cold bath and subsequently became very ill.

Rotating product displays are useful for all kinds of products, but especially so for artworks such as bronze figurines, porcelain, any object where it is important to view from all sides. Product rotations are interactive, so that the viewer can rotate the object with their mouse and view any aspect at their leisure. The viewer can also zoom to a larger view to inspect detail.

This example is a French figurine in spelter, signed Fayral at the base. It is quite small at 25cm tall including the plinth. This particular item has no provenance, and many copies, both legitimate and unauthorised, were made of bronzes in the Art Deco period.

We photographed this artwork in our studio at Boffa Lane in Hyde Park, using our computer controlled turntable to make 72 images at precise intervals. Software from Magic360 on our website allows this interactive display to be shown. If this kind of product display interests you please contact us on 0413637775. 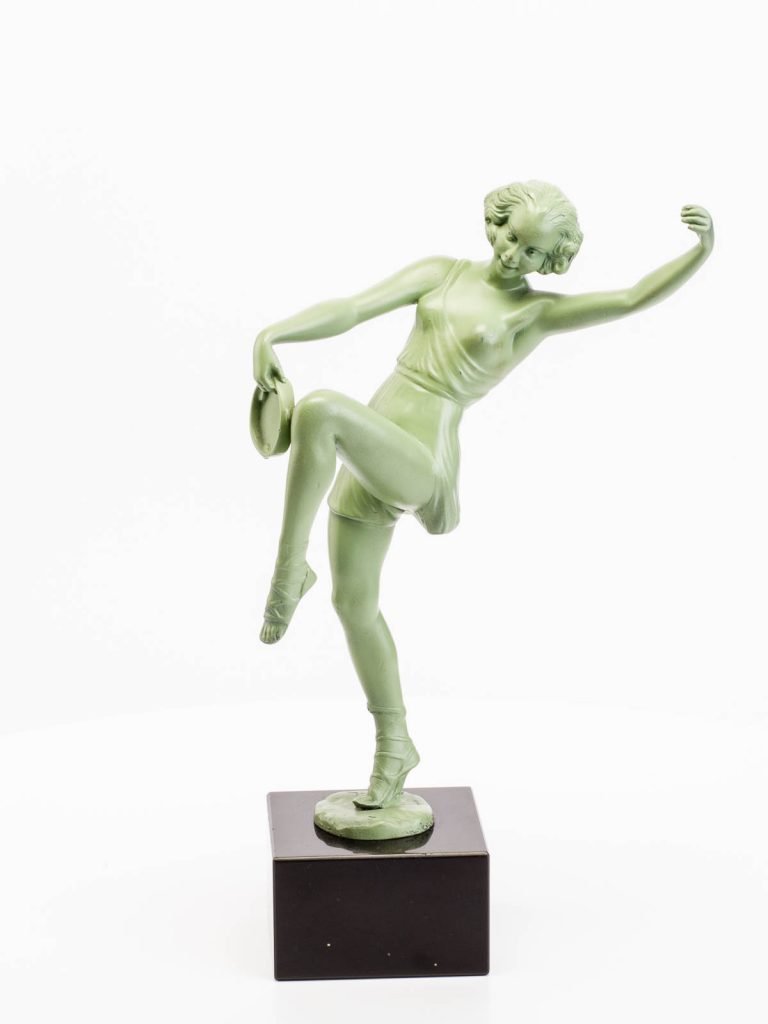 As part of a personal project I ventured out to photograph two notable examples of modern architecture in Adelaide: the Convention Centre, and the Medical Research Institute. In between we happened on the Jeffrey Smart Building at Uni SA, so made a shot there. All three images were made on the venerable Nikon D3 camera, now over 10 years old, and only 12 megapixels. The lens was the Nikon PC-E 24mm tilt shift lens, hand held at full shift, shot at f11. 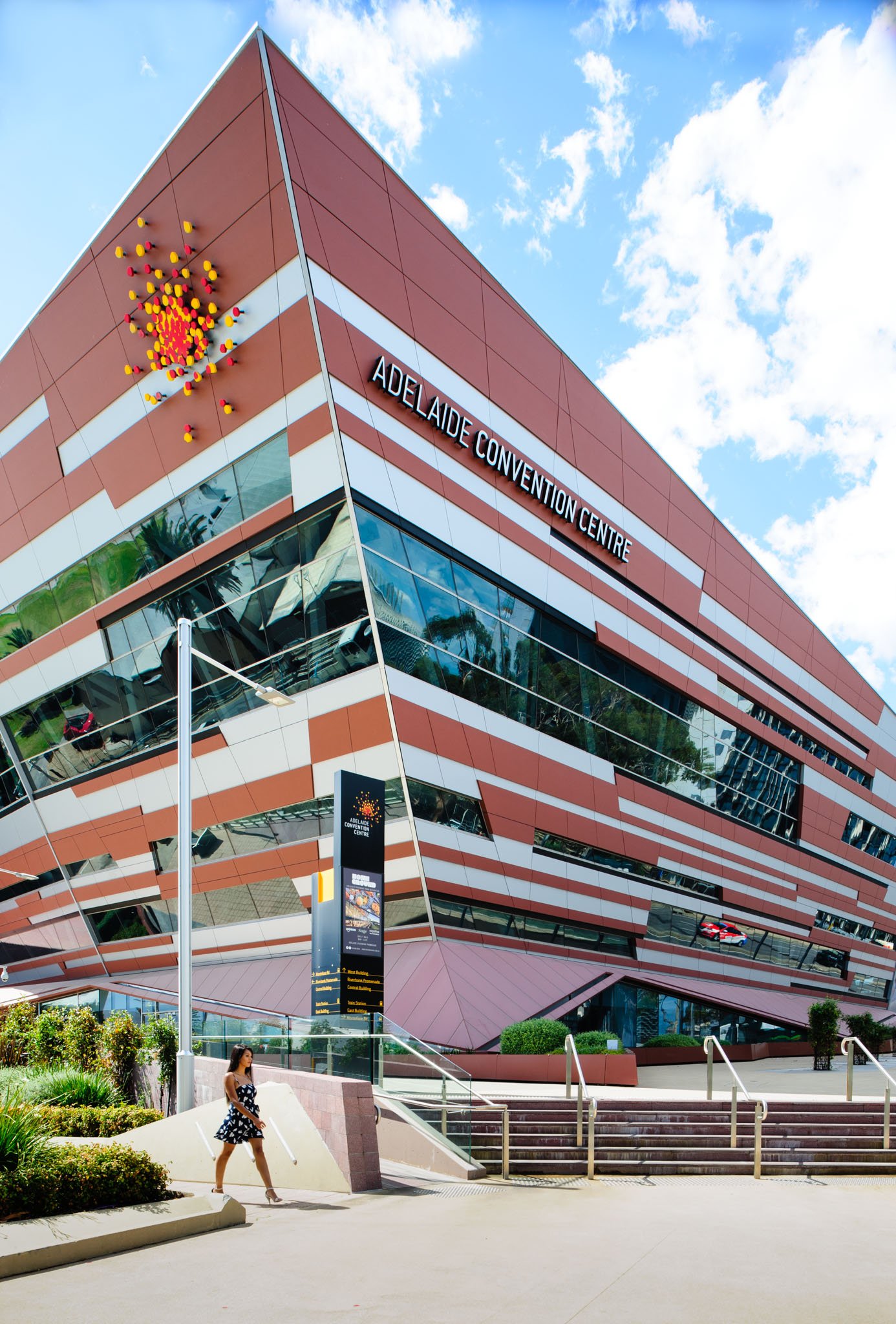 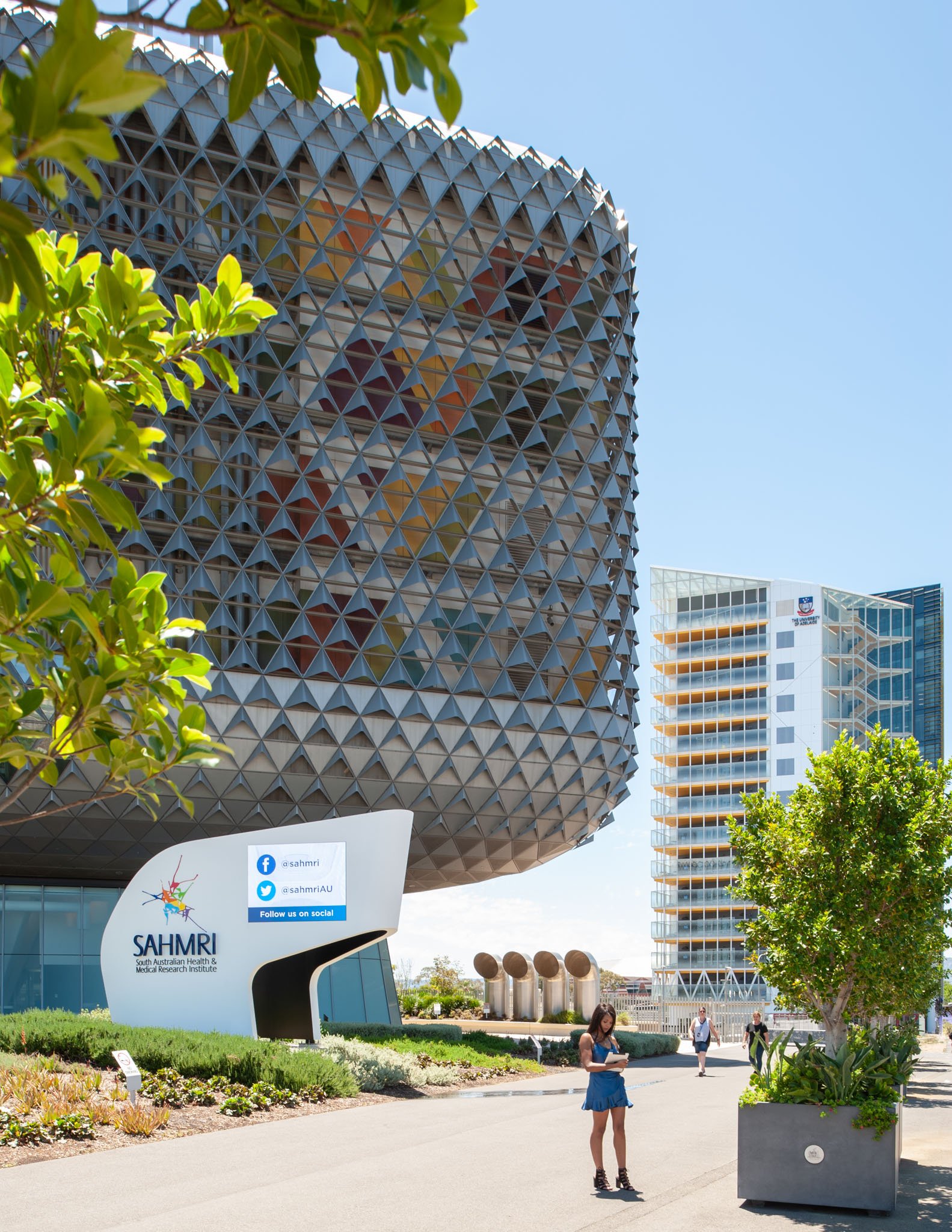 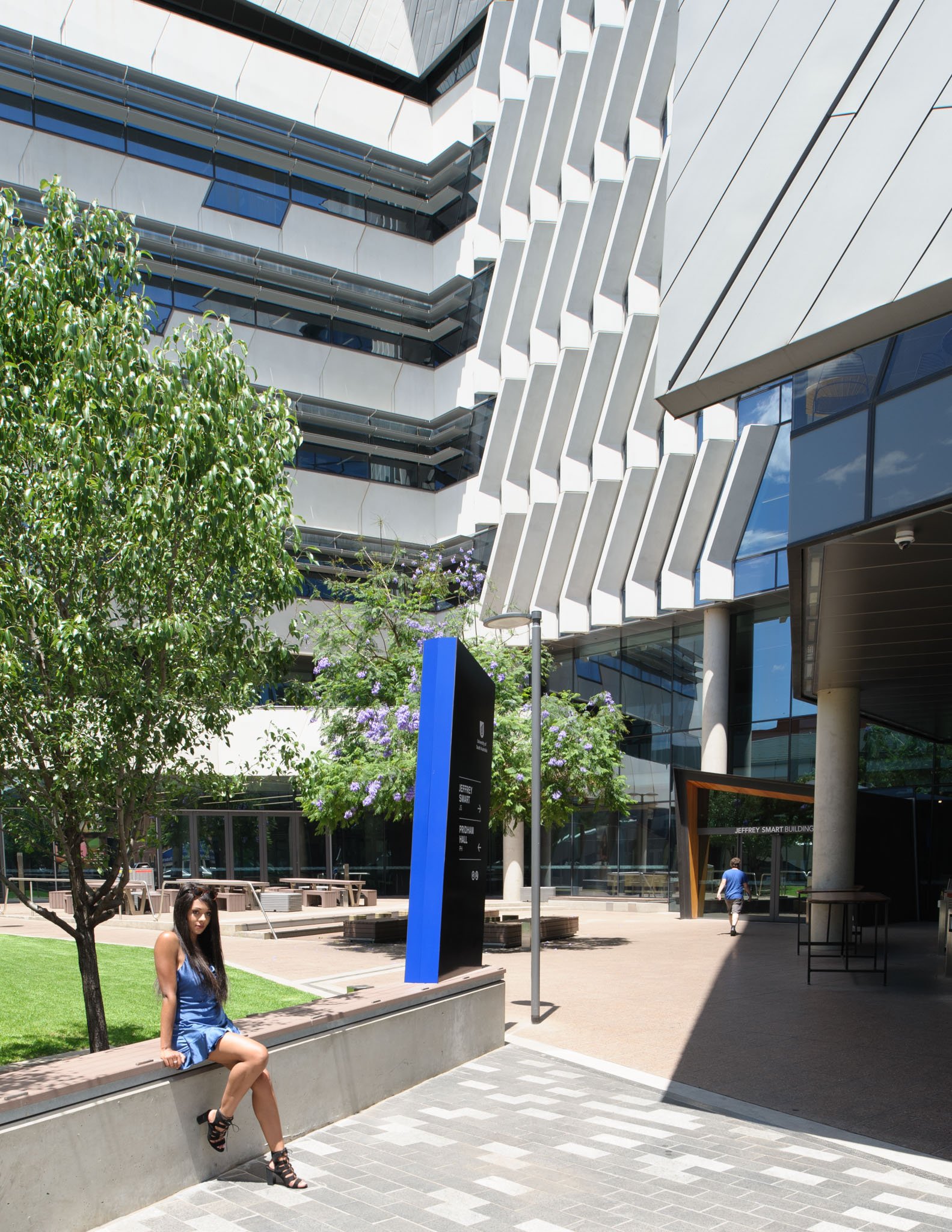