We went to Bone Gully in Kuitpo Forest south of Adelaide recently, specifically to shoot on Hasselblads: the relatively old H4D40 digital camera and the much older 500CM film camera, loaded with Kodak Portra 400. Twelve shots on the roll, one roll only. Focussing this camera is quite difficult, it has no autofocus, no auto exposure, no auto anything. No electronics, no battery. When I got the film back I found that 6 shots were a little out of focus, the other six were good. I did not shoot tight enough, so the resultant scanned images have been cropped in Lightroom, no other changes made.

Cross Lighting with the Sun 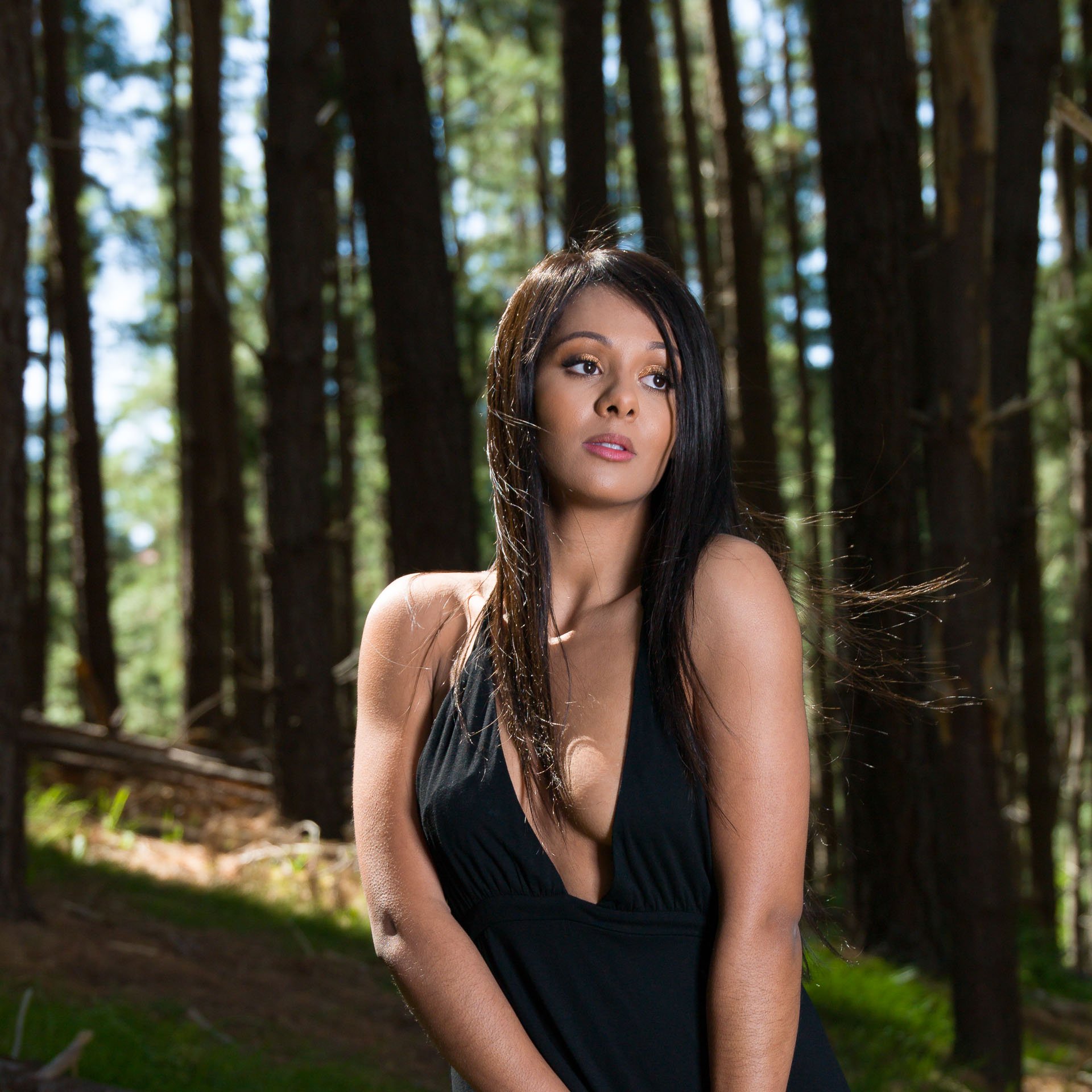 More images from the recent shoot with Sophia Anna

We spent some time getting these images, using a battery powered strobe to provide some lift in the lighting. Finding a flat spot for the light stand was half the battle. 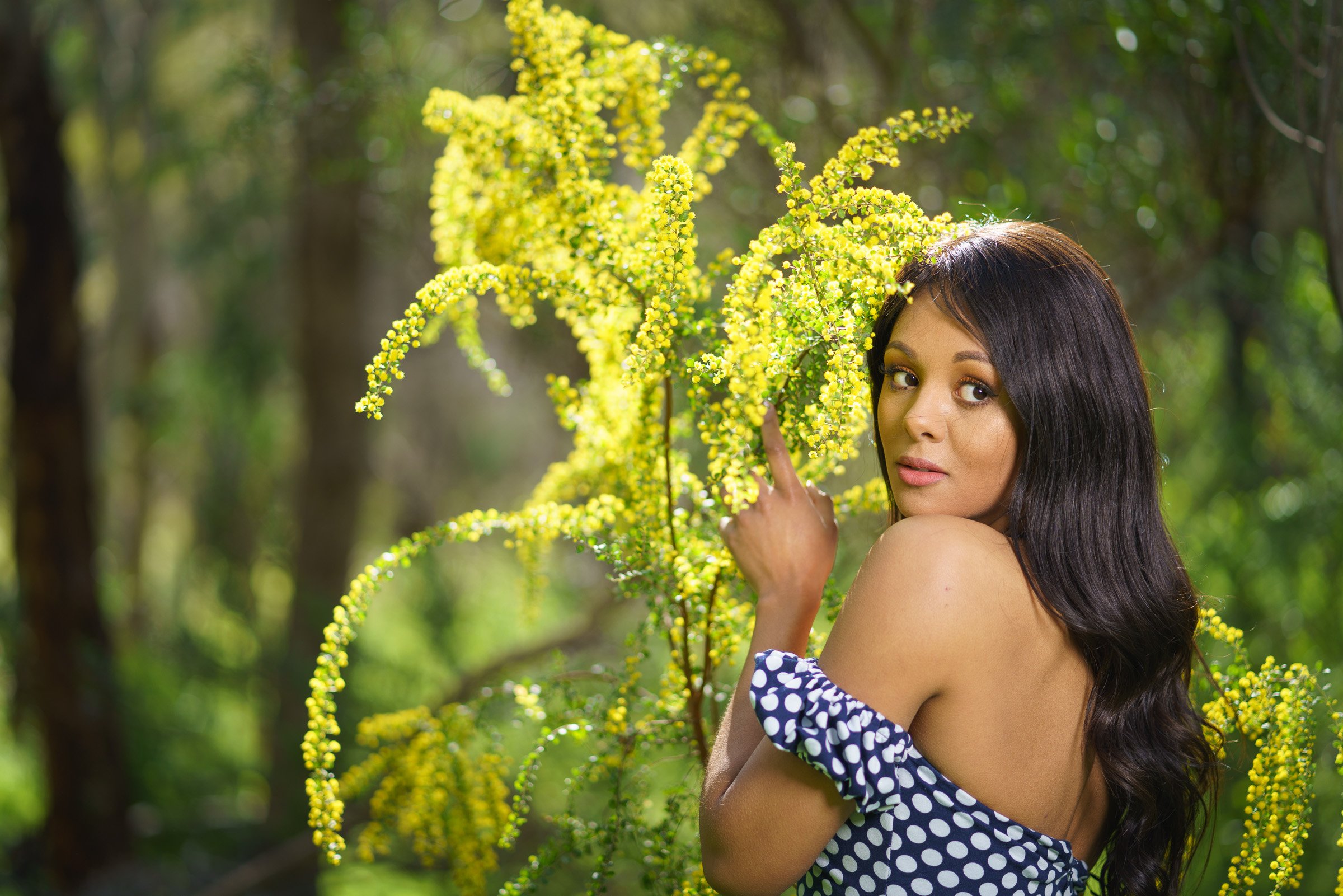 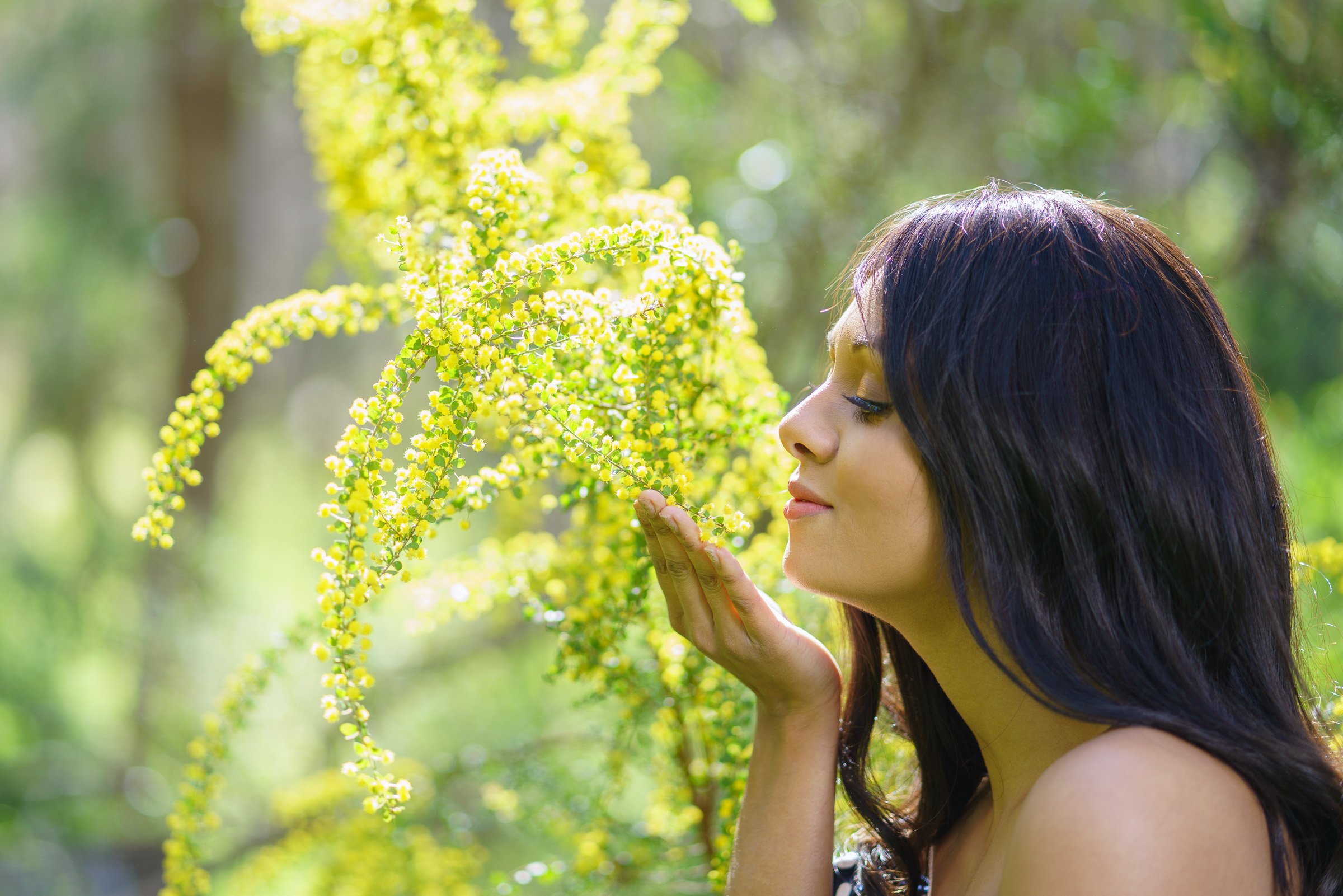 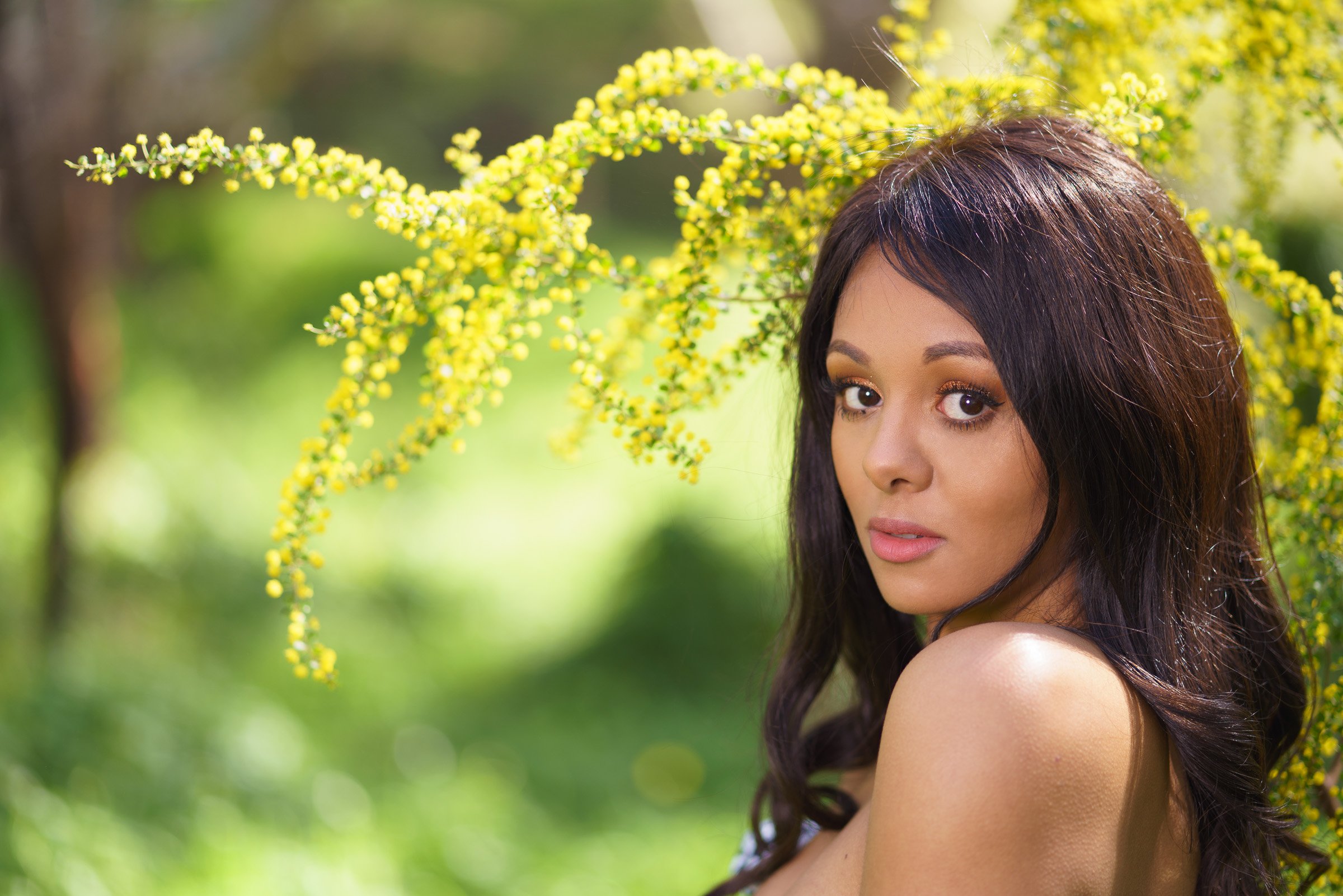 If you saw my last post, you will know that I visited Brownhill Creek with Sophia Anna and shot some still photographs. We also shot a small amount of video, testing a different video setup. Here is my edit:

The Woman in Black

I went out to Brownhill Creek on a not too warm spring morning with the wonderful Sophia Anna, primarily to shoot with the blooming wattle, but also to test some video gear, and use a black cloak I’ve had for a while.

The video was not wonderful, but useful in learning some limitations of the equipment. The stills photography was much more successful. Here some images of Sophia in black. 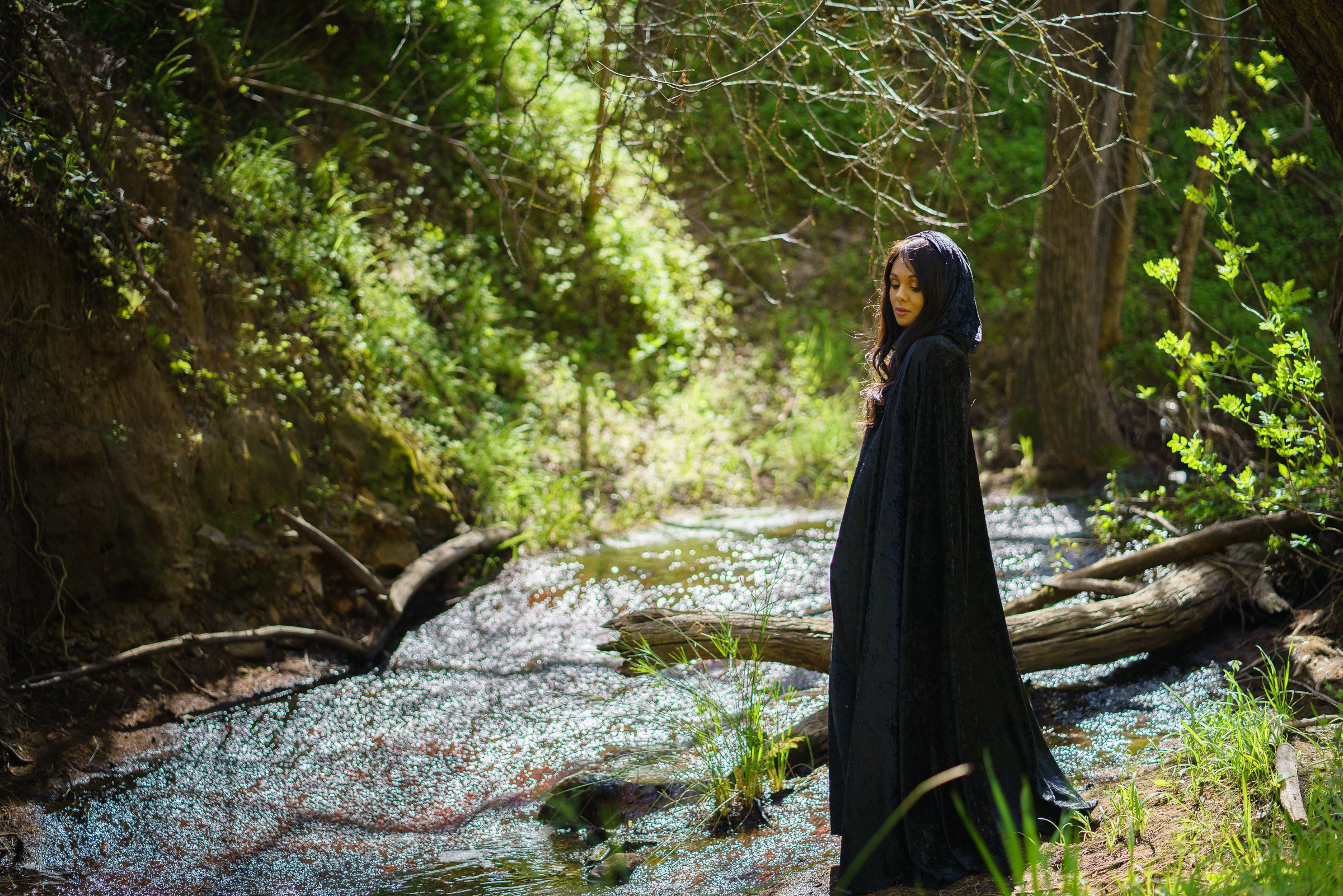 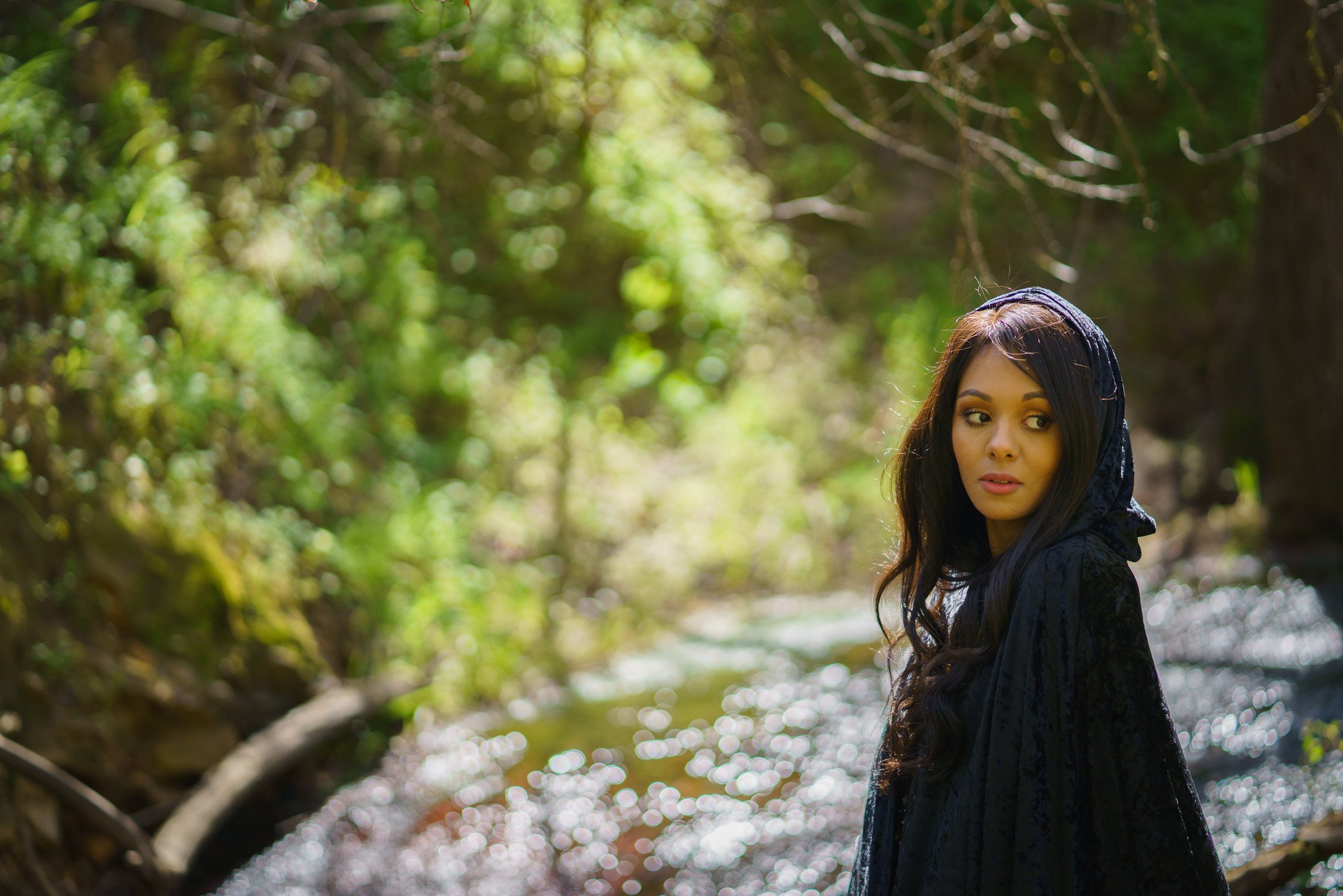 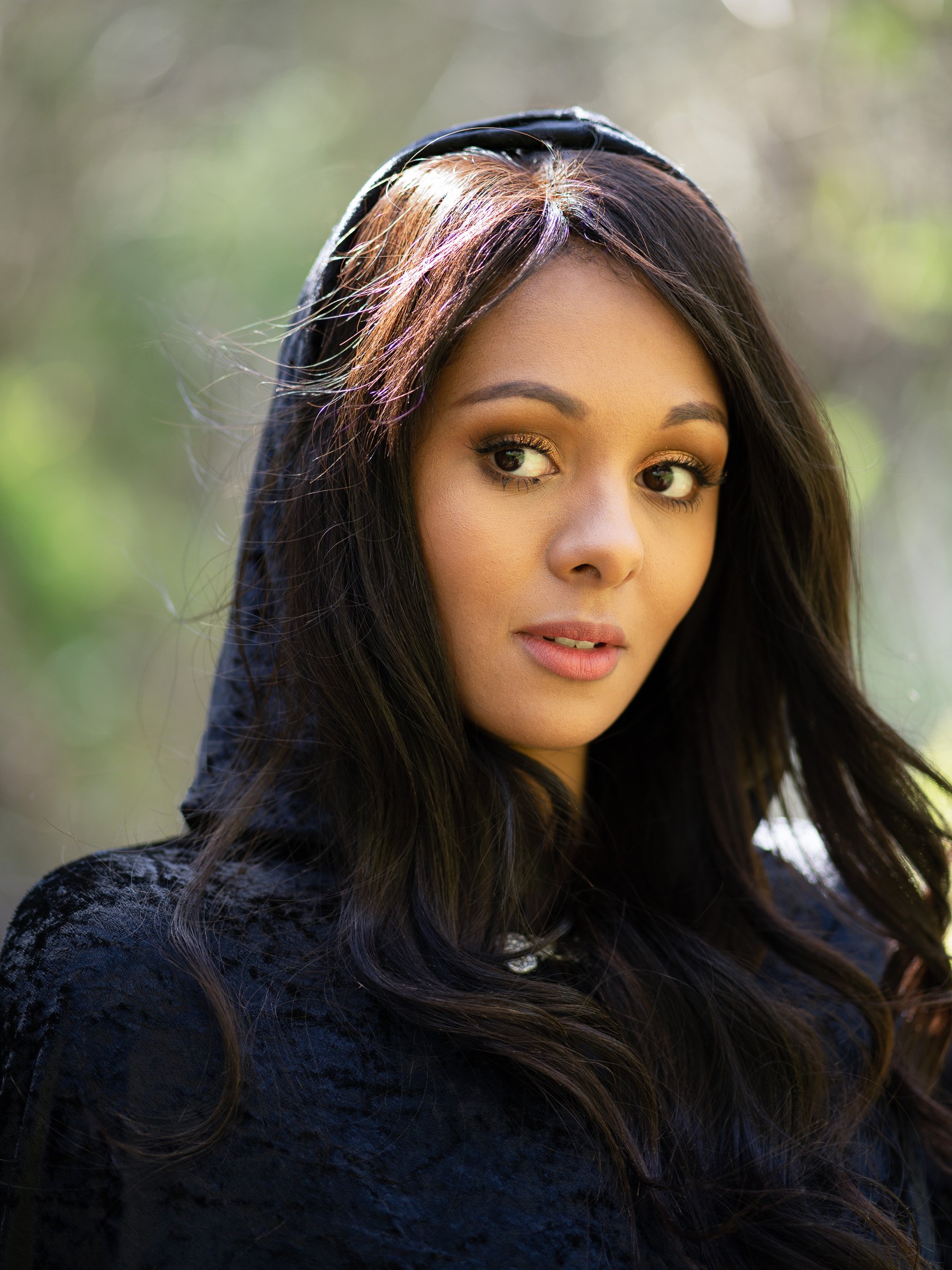 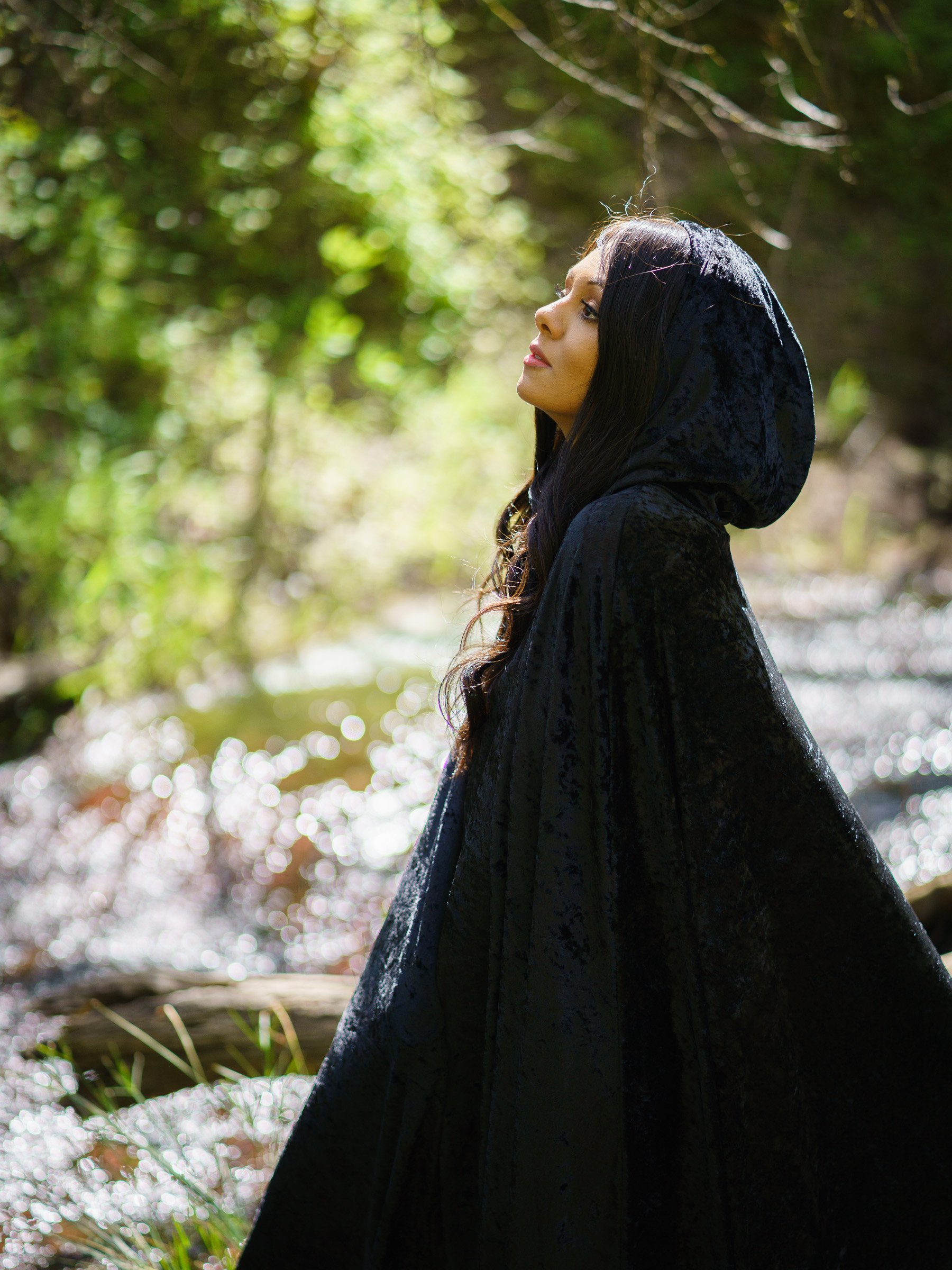 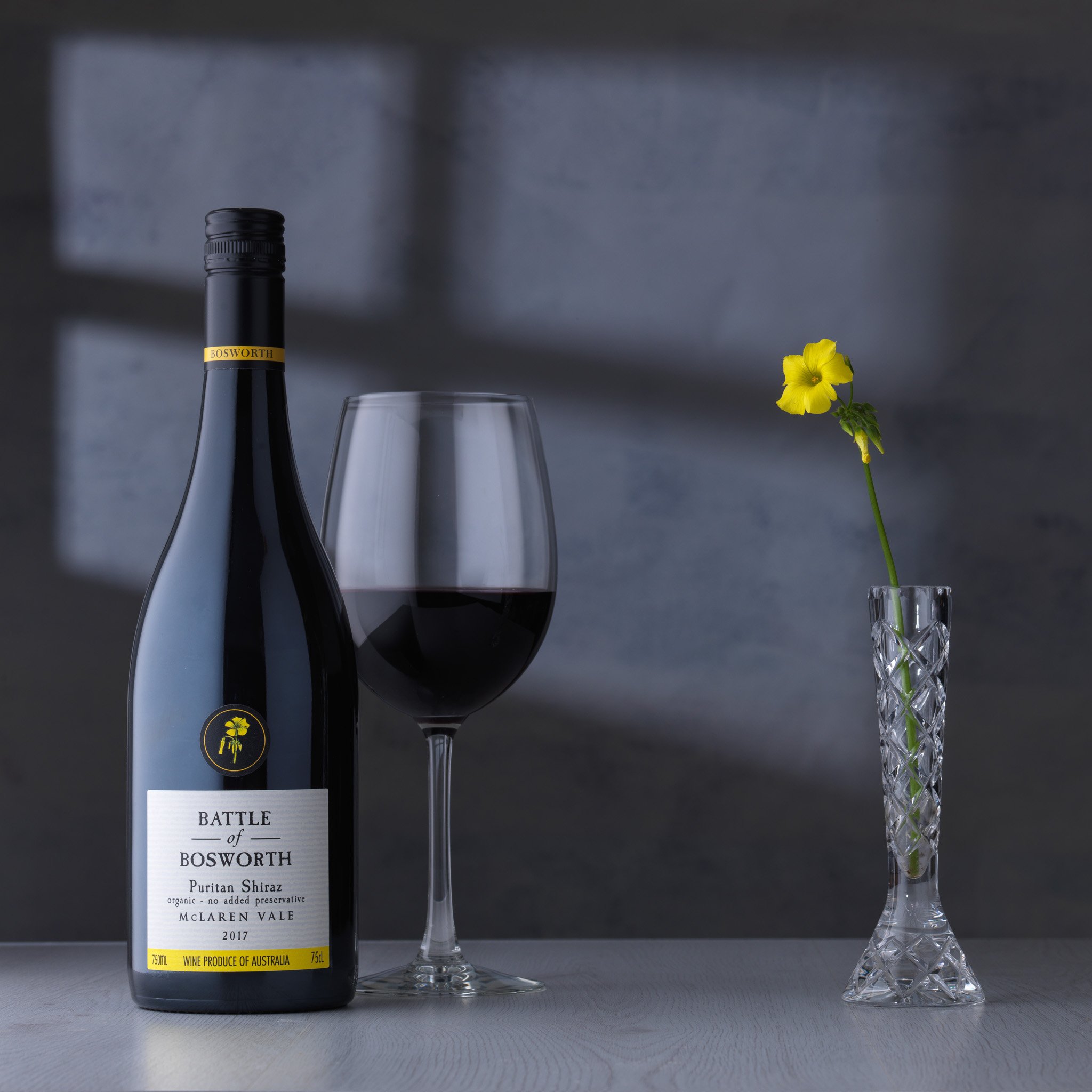 I was surprised to see this organic wine in the local bottleshop, but what attracted me to it was the label – Battle of Bosworth.  Just why would an Australian wine be named after a battle fought in England in 1485, ending the war of the Roses between the Houses of Lancaster and York? (More complicated than that but this is not a history lesson). And what was that yellow flower on the label, when the roses in the aforementioned war were red or white?  Read on and all will be revealed.
It turns out that the wine is made by a guy called Joch Bosworth, so the name was somewhat obvious and irresistible.
So what about the flower, when we were expecting a white or a red rose? That’s where it gets complicated. Bosworth’s vineyard has been an organic enterprise for many years. There is a strict standard for organic agriculture, which varies a little from country to country, but basically it means no chemical fertilisers, no herbicides (weedkillers), and no pesticides.  I’ll come to the question of sulphites in wine production post harvest later.
So we find that organic vineyards use composts and manures as fertilisers, minimal tillage to avoid destroying soil structure, and a systems approach to pest and weed management.  By understanding the vineyard as a system, it is possible to manage insect populations for instance, discouraging the unwanted and encouraging their beneficial competitors.
Bosworth uses this systems approach to weed management, actually using one weed to control others. This weed is the soursob, whose flower it is that features on the label. The soursob is almost impossible to eradicate, but it turns out that it grows prolifically during winter when the vines are dormant and dies off as the weather warms up and the vines start to grow. The soursob crowds out other weeds and prevents their growth.  I won’t go into other details here, I just want to explain the flower on the label!  More detail scan be found here https://www.battleofbosworth.com.au/organic-vineyards/
Now to the sulphites. The bottle carries the words ‘no added preservative’, meaning that sulphur dioxide has not been added to the wine. The words sulpites and sulphur dioxide are often used interchangeably, but essentially sulphites are solids which can be dissolved in liquids and sulphur dioxide is a gas. Like everything, it does get more complicated than that. Sulphites are disinfectants. They kill bacteria, fungi, and yeasts.
Much of what is written about sulphites on the internet varies from simply incorrect to downright nonsense. Unfortunately it is repeated uncritically to the point where it becomes difficult to discern the truth. It is often claimed that the ancient Romans and Greeks used sulphites in winemaking, but proof is never offered. Research shows that this assertion is quite unlikely. Wines of that period were vastly different to what we enjoy today, mostly being only slightly removed from vinegar. The longer lasting wines were sweet and very alcoholic.
Sulphites can be added at several points in wine production – in the crusher to kill native yeasts and bacteria, later to stop fermentation, before bottling to help preserve wine in the bottle. In some countries organic wines cannot have added sulphites, in others they can.  There is also ‘organic grapes’, ‘wine made from organic grapes’, and wine made with no added preservative.  It is important to acknowledge however, that the natural fermentation process produces some sulphites naturally.
Winemaking and grapegrowing are very complex indeed. I’m hardly scraping the surface here.
Sulphites get something of a bad rap as a wine additive, as if they were the only chemical added to wine.  It might be the only one mentioned on the bottle, but for a list of more than 50 permitted additives in wine see http://www.morethanorganic.com/additives-in-wine
Here are some: note DMDC is actually poisonous but breaks down quickly after addition. It is also used in soft drinks. Here’s a tip: the larger the winemaker, the bigger the production runs, the more additives and processing will be used.
Ammonium salts
Tartaric and other acids
Powdered tannin
Sugar
Pectic enzymes
Gum Arabic
Dimethyl Dicarbonate (DMDC)
Mega Purple

Showcasing the latest Jaase dresses in store for Coltish. We shot one roll of film on the Hasselblad – 12 shots, one is from a previous shoot, one was lost because of lens flare:

We were lucky enough to have a shoot with Amy Caldwell at Heywood Park in Hyde Park Adelaide. Lucky also in that the weather cooperated and gave us the big softbox sky rather than the usual blowtorch Adelaide summer sun. For this shoot we borrowed some clothes from Coltish Boutique on King William Road: the Daisy Royale Top from Dasha the Label, and the Venice Wrap skirt. The colours matched Amy’s red hair and the greens and browns of the park perfectly. As another outfit we paired the Daisy Royale top with Minkpink’s Mandala Wonderpants, and obtained an image which I can call the Heart and Soul of Boho. 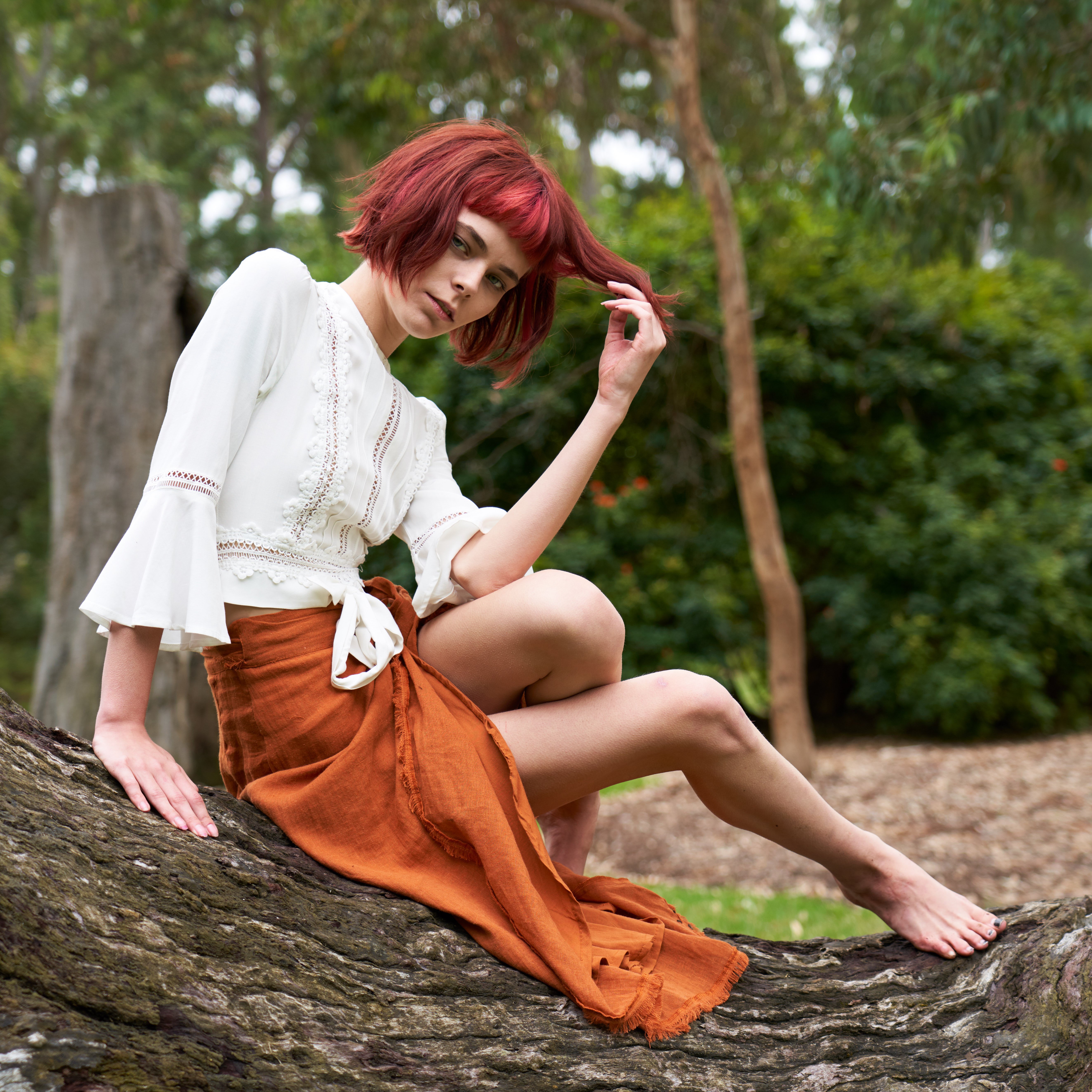 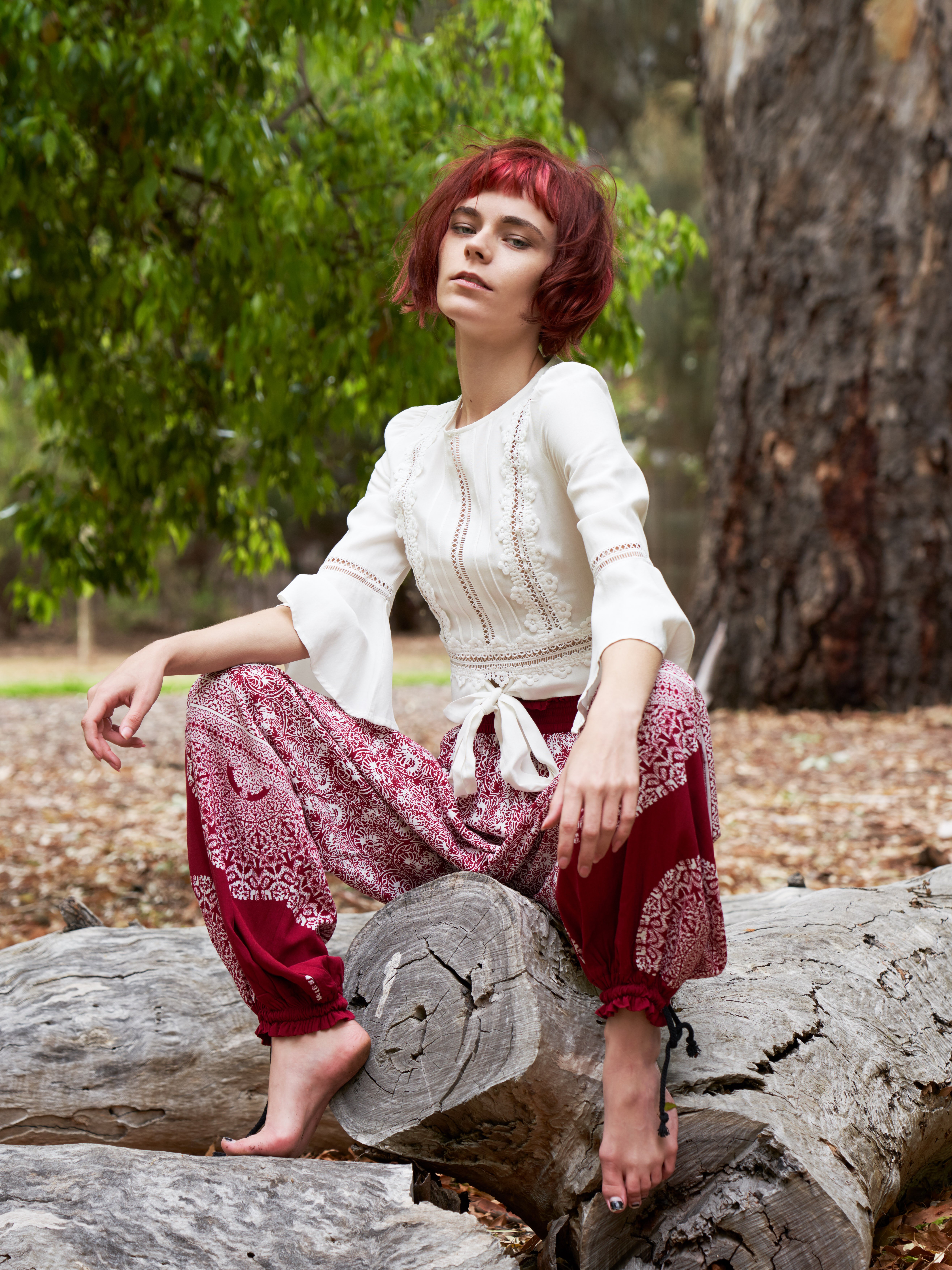 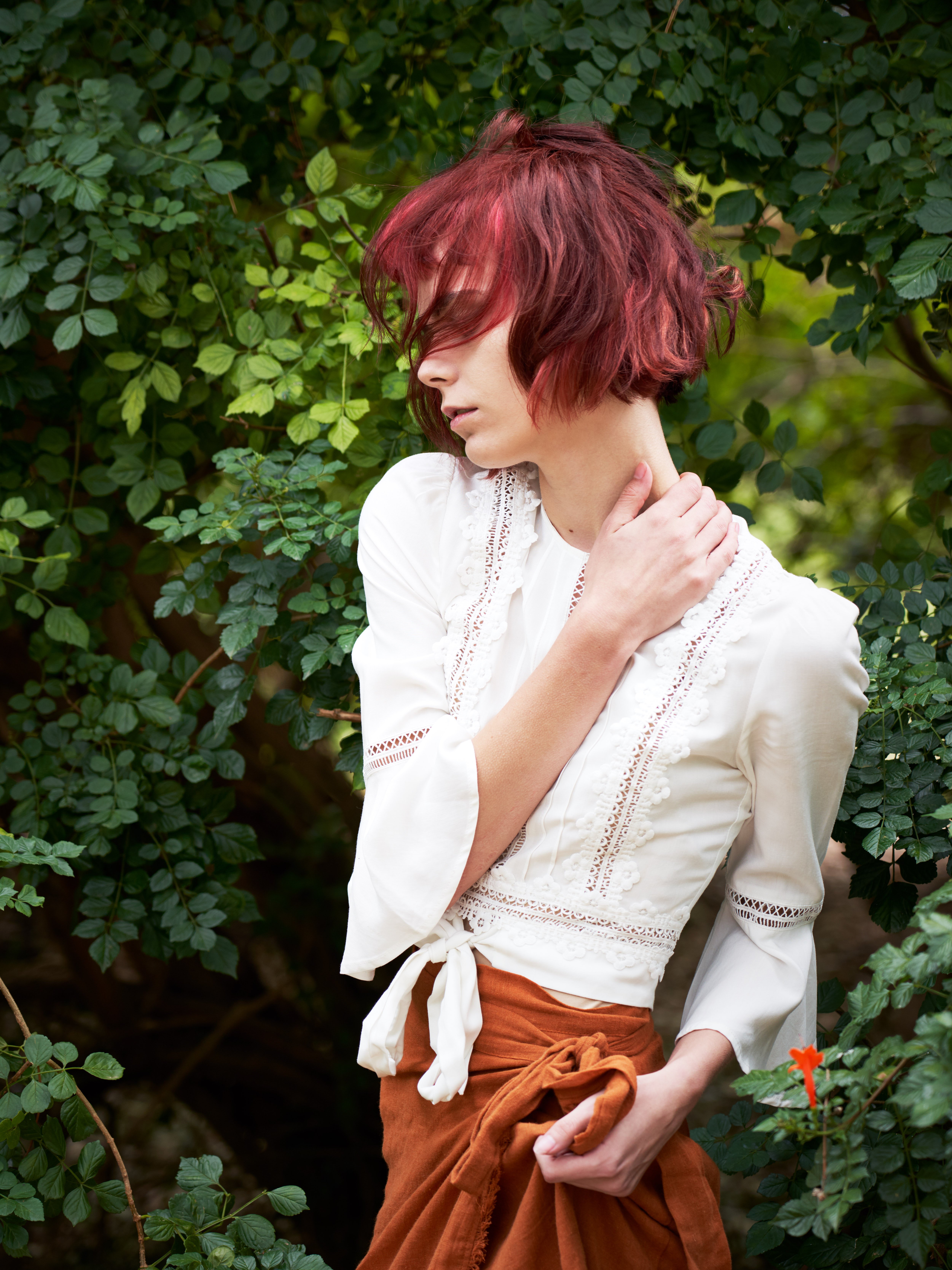 For more images from this shoot, go here.

While looking for something to add to my Shoe Photography portfolio, I came across these shoes, called Swift, by Skin Footwear. Shoes are among my favorite products to photograph, both because they can incorporate beautiful design, and because to the challenges in presenting them in an interesting way. High heels offer the best opportunities to a designer to produce beautiful curves.  In this shoe the designer has excelled themselves. There is probably an optimum heel height for the best curve in the sole of the shoe, and this height is probably too great for the health of the foot. This has not stopped women (and in some periods of history, men) from wearing high heels. The slim heel in this design, close to the classical stiletto heel first seen in the 1950’s, could only be constructed with modern materials and methods.

At one time, the wealthy wore platforms under their shoes to keep them out of the mud. An elevated heel was also found to be indispensable by horse riders, as the heel prevented the foot from slipping through the stirrup. Men wore high heeled shoes in the French court following the fashion of the king, Louis XIV. This was primarily to add height and dominance to the wearer.

There is a great deal of nonsense written about heels generally and high heels in particular. Journalists, never known for the depth of their knowledge on any subject, seem to just make stuff up when writing on this subject. For some authoritative writing on the subject, see this article explaining why the French heel is no longer seen today: The American Duchess

There are a great many types of heels seen by a student of fashion over the years from the time of Louis onward. French, Cuban, and Spanish heels to mention a few were all distinct patterns of heel design. The Cuban heel is still popular, especially on riding boots and possibly Flamenco shoes. The stiletto heel is a development of the Itallian or Kitten heel. With such a variety, more shoes are going to find their way into my Shoe Photography portfolio. 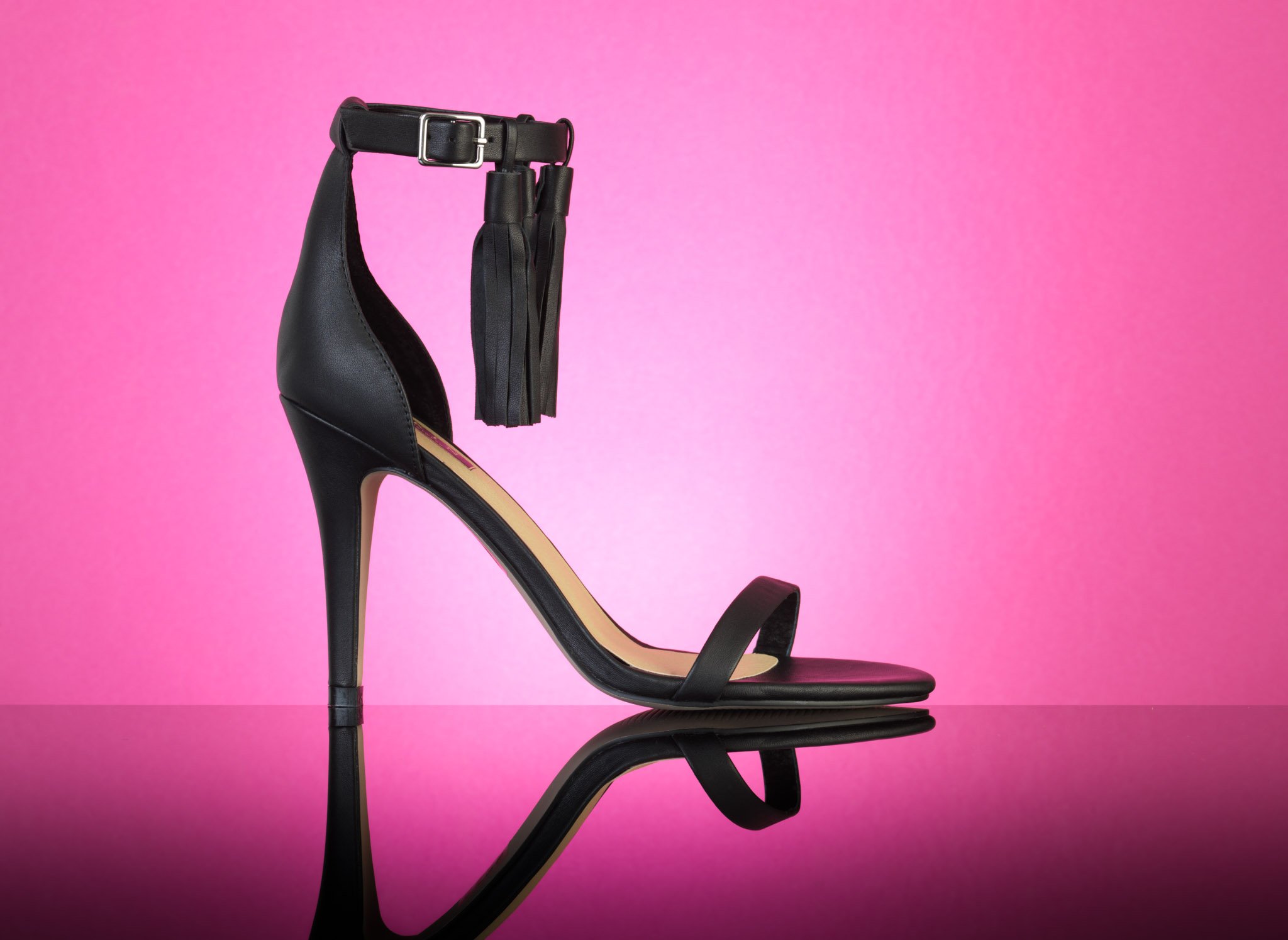 I came across these shoes by accident. Though nearly new, they had been discarded. So I added some glitter….